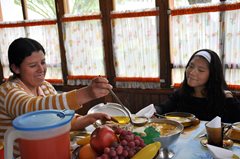 Getting together for lunch (photo: SOS Archives)

SOS Children's Village Cochabamba-Jordan (previously known as SOS Children’s Village Jordan) is located in the Bolivian city of Cochabamba, capital of the province of the same name. While agriculture once represented the main pillar of Cochabamba's economy, the region has become more diversified over recent years, making Cochabamba a major industrial pole in the region. However, this does not mean that poverty has disappeared from Cochabamba. Much to the contrary, poverty levels in and around the city continue to be fairly high.

More than anywhere else in Bolivia, Cochabamba is a region marked by extreme contrasts. While the municipalities of Alalay and Vila Vila are among the poorest of Bolivia, Cercado is one of the country's richest. Thousands of families lack access to drinking water, paved roads, sewage systems and even electricity. As usual, children are particularly vulnerable in such a harsh socioeconomic environment. Around 32,000 children in Cochabamba are orphans and grow up without parental support.

It is estimated that all over Bolivia, roughly 4,000 children live a life on the streets. They are highly vulnerable to exploitation by adults, falling into drug abuse and a life of crime. Many of these young children come from Cochabamba. Those who do not live in the streets are often forced to work because their family depends on the extra income they make. In many cases, they are exposed to dangerous machinery and toxic substances such as pesticides. Instead of going to school, many of these children work up to ten hours a day in an environment that may seriously affect their psycho-social and physical development.

Child malnutrition continues to be a problem in Cochabamba. Out of 100 children, around 30 suffer from anaemia. Nearly one in every five children is chronically undernourished as access to food is often limited.

According to reports, no other country in Latin America is more affected by the phenomenon of child poverty than Bolivia. It was against this background that our organisation decided to take action in the 1960s by implementing the first SOS Children's Village in the country. The founder of SOS Children's Villages, Hermann Gmeiner, met an Austrian nun who had been working in Bolivia while he was there on a visit. She proposed taking over and renovating the "Gota de Leche" orphanage which had been founded at the beginning of the 20th century. Thus, the former home was completely re-designed and turned into the first SOS Children's Village in the country.

What we do in Cochabamba-Jordan

Through our SOS Youth Programme, young adults are given the opportunity to live in a house together while they attend vocational training or go on to higher education. With the support of qualified youth counsellors, the young people develop perspectives for their future, learn to shoulder responsibility and increasingly make their own decisions. Due to the high number of children and families in need of help and protection, SOS Children's Village Cochabamba-Jordan reached its limits of capacity at one point. Thus, our organisation set up another programme, SOS Children's Village Cochabamba-Tiquipaya, in 1995.