While the economic situation in Argentina has been improving overall, Misiones has been left behind

Having fun at the children’s village (photo: SOS archives)

Oberá is a city of almost 60,000 inhabitants in the Misiones province of Argentina. It is situated in a hilly landscape in the subtropical rainforest. Originally inhabited by nomadic indigenous tribes, Oberá was founded in the early 1900s by European settlers from Germany, France, Norway and Switzerland, amongst others, who arrived via Brazil, and later Eastern European and African families. Oberá’s inhabitants are therefore the descendants of over 70 nations, as they themselves proudly claim.

The Misiones province is located in the far north-east of Argentina and shares borders with Brazil in the north and south, as well as Paraguay in the west. This geographical location makes the region a strategic point on drug trafficking routes. It is estimated that several tonnes of marijuana pass through Misiones each month. Obviously, this has a devastating effect on the safety of children. Especially in poor families, the lure of easy money puts many at risk of becoming entangled in criminal activities.

The trafficking of children, especially babies, is also a very serious problem in the region. Mothers from the poor, peripheral neighbourhoods of Oberá are often recruited while still pregnant. They are offered money to give up their children, who are then sold on to wealthy families for “adoption”. Children from this area are popular due to their pale skin tone, a heritage of their European ancestors.

This phenomenon is some indication of the sheer destitution young women here face. Unemployment levels are extremely high, prostitution – including child prostitution – is common, as are illegal abortions. Up to 15 new HIV infections are registered each month. Children born into such an environment have little hope of a brighter future, unless they and their families are provided alternatives – and the necessary support to make them a reality.


What we do in Oberá 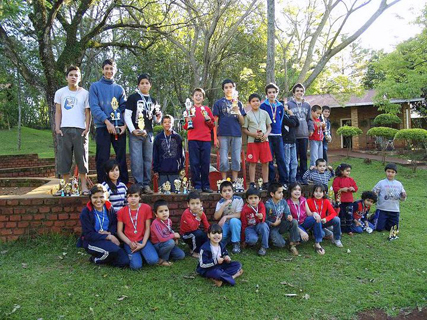 The children are proud of their sporting achievements (photo: SOS archives)
SOS Children’s Villages began its work in Argentina in 1979 on the outskirts of the small city of Oberá. An SOS Kindergarten provides preschool lessons for up to 100 children in six groups. The SOS Gmeiner School offers an education to up to 490 primary school children and 430 secondary school students. Vocational subjects at the school include electrical engineering, carpentry, tailoring, IT, and bakery, to name a few. Adult education courses that are open to the community are held here in the evenings.

For children in Oberá who are no longer able to live with their parents, twelve SOS families can provide a loving home for up to 87 children. They live with their brothers and sisters and are affectionately cared for by their SOS mothers.

When young people are ready to leave their family in order to pursue further education or vocational training, the SOS Youth Programme offers shared housing in Posadas, the capital of the Misiones province. With the support of qualified counsellors, the young people can finish their education and gradually prepare for an independent life.