Recovering from the 2002 economic collapse 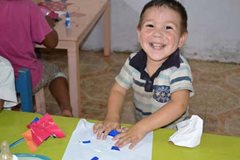 However, in 1955 Perón was overthrown and fled into exile. In 1976, a military junta took power, headed by General Jorge Rafael Videla. During his dictatorship, thousands of people disappeared. Democracy returned in 1983, after a defeat in the Falklands war against the British, and has persisted since then.

High inflation has always been an issue in Argentina. However, in 2001, the country faced the most severe social and economic crisis in its turbulent history. The critical period started with the decrease of real GDP in 1998 and ended with a complete collapse of the economy in 2002. People started to withdraw their money from bank accounts, exchanging pesos into dollars and sending them abroad. After 2002, the country's economy recovered at an impressive pace and it is now one of Latin America's largest and most competitive. Along with Brazil, Argentina is the second Latin American country that is a member of the G20.

In spite of impressive economic recovery, poverty has not yet disappeared in Argentina

According to the United Nations Development Programme, Argentina is currently ranked second among all Latin American nations in terms of human development. Only Chile ranks higher in the Human Development Index (HDI) than Argentina. Nonetheless, the long term effects of Argentina's economic collapse in 2002 can still be felt by many.

After the collapse, more than half the population ended up living in poverty (roughly 45 per cent in 2002). Although the country saw quick economic recovery, thousands of Argentines are still to benefit from the economic upturn. At the moment, roughly 11 per cent of the country's population live in conditions of poverty. The incidence of rural poverty is a lot higher and remains a problem.

The HIV/AIDS prevalence rate for Argentina is 0.5 per cent, which means that there are around 110,000 people living with HIV. In about four out of five cases the virus is transmitted through unprotected sexual intercourse among men and women. Although men are still more affected by the virus than women, a “feminisation” of the disease has been recorded in Argentina over recent years, meaning that young women aged 15 to 39 account for a large share of new HIV infections.

630,000 children in Argentina have lost their parents. Many of those who are without parental care are growing up in dysfunctional families or on the streets. Adolescent pregnancies remain a problem in Argentina. Babies born to young mothers face a higher risk of neglect and abuse, poverty and physical illness. The teenage mothers themselves are also at risk of these problems.

Although the primary school enrolment rate for Argentina is high at 98 per cent, many Argentinian children experience difficulties performing even the most rudimentary reading tasks. Studies show that they lack the basic skills required to participate effectively in society. The infant mortality rate for Argentina amounts to roughly 13 per 1,000 live births and is therefore more than double the rate for Cuba, a much poorer country. Regional disparities are quite dramatic: while in the country's rural north child mortality figures are exceptionally high, they are much lower for Buenos Aires.

Child labour also remains an issue in present-day Argentina: in rural areas, 35.5 per cent of all children between the ages of 5 and 13 engage in labour activities. In most cases, work interferes with the child's education, which means that the majority of working children either miss classes on a regular basis or do not attend school at all. Lacking skills, they are likely to remain manual labourers once they become adults. Young people and children who work in agriculture are frequently exposed to toxic fumes which harm their lungs and eyes. In larger cities, children selling merchandise on the streets are a common sight. They are extremely vulnerable to recruitment as commercial sex workers.

At present, there are four SOS Children's Villages in Argentina. They are located in Córdoba, Luján, Mar del Plata and Oberá. In Argentina, we help children and young people by providing day care and education. It is the aim of SOS Children's Villages to enable children who are at risk of losing parental care to grow within a caring family environment. To achieve this, SOS Children's Villages works directly with families and communities to empower them to effectively protect and care for their children, in cooperation with local authorities and other service providers. Children whose families cannot take care of them can find a loving home in one of the SOS families.