Over 1.6 million children have lost the care of their parents in Zimbabwe. HIV/AIDS has had a devastating effect on families and the communities they live in. Some steps have been made to protect the most vulnerable children, but much more remains to be done.

Zimbabwe has not yet recovered from its severest economic crisis 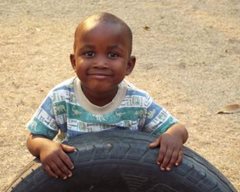 Children who have lost parental care find a new home in an SOS family (photo: S.Kitshoff).
SOS Children’s Village Waterfalls is located in the Waterfalls suburb of Harare. Harare is Zimbabwe’s capital and largest city, with a population of over 1.6 million and 2.8 million in its metropolitan area. It is located at an altitude of 1,400 metres in north-eastern Zimbabwe. It is an important centre for trade and also has a significant manufacturing industry.

Harare was very severely affected by the crisis that saw economic output in the country decline by 45 per cent between 1999 and 2008. Chronic water and electricity shortages affected even the wealthiest parts of town. Political unrest and instability have marked the past decade. In 2005, over 700,000 people lost their homes due to a government decision to destroy urban slums. In 2006, Zimbabwe’s annual inflation rate rose to over 1,000 per cent and continued to rise, reaching 231 million per cent in late 2008. In January 2009, a 100 trillion Zimbabwean dollar note was launched.

A lack of social services endangers thousands of children

Although the economy has slowly begun to recover, the situation remains precarious and marked by uncertainty. The lives of the population have been severely affected, especially those of the younger generation. The crisis plunged thousands of families into destitution. Unemployment reached over 80 per cent and millions of people faced food shortages. In addition, HIV/AIDS continues to spread. Infrastructure is failing, social and health services are not sufficiently available or accessible to the population and funds to improve them are lacking. In early 2012, cholera and typhoid outbreaks hit Harare, in part due to overflowing drainage flooding into people’s homes. The provision of clean drinking water also continues to be a serious problem in the city.

Children are the hardest hit by this difficult situation. Thousands of children under the age of 18 have been forced to quit school and go out to work in the streets of Harare to help their family survive – today, around 20 per cent of children are estimated to be working in the capital. Family support networks have collapsed due to the desperate circumstances and in many cases due to HIV/AIDS. Children who have been left without parental care, those who are head of the household, and those with disabilities are the most vulnerable.

What we do in Harare 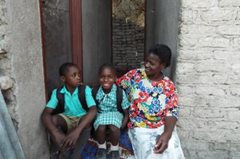 Thanks to the SOS Family Strengthening Programme, this woman runs a small business and can provide for her five dependents (photo: S.Kitshoff)
SOS Children’s Villages first began its work in the Waterfalls suburb of Harare in 1989.

Strengthen families: In recent years, we have continuously expanded our family strengthening programme in the region so as to reach as many struggling families as possible. The aim is to alleviate hardship and maintain family stability so that children will be safe and protected and grow up in a loving home. The social centres ensure that children have access to essential health and nutritional services, as well as education. We assist parents by providing guidance on income-generating skills and parenting practices, as well as counselling and psychological support where needed. Our support goes out especially to adults and children who have been affected by HIV/AIDS. In cooperation with local organisations, we also work towards strengthening the support systems for vulnerable families within the community.

Care in SOS families: For children from the region who are no longer able to live with their parents, SOS families can provide a loving home for up to 180 children. In each family, the children live with their brothers and sisters, affectionately cared for by their SOS parents.

Education: The children attend the SOS Kindergarten in Waterfalls together with children from the neighbourhood, which ensures that they are integrated into the local community from a young age. The children then go on to complete their primary education at the SOS school, which is attended by around 840 pupils.

Support for young people: When young people who grew up in an SOS family feel ready to move out of the family home in order to pursue further education or vocational training, our SOS Youth Programme continues to support them as they make the transition into adulthood.