Over 1.6 million children have lost the care of their parents in Zimbabwe. HIV/AIDS has had a devastating effect on families and the communities they live in. Some steps have been made to protect the most vulnerable children, but much more remains to be done.

Poverty and lack of opportunity 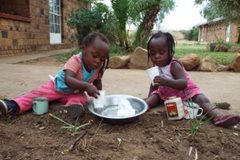 Sisters “cooking” together (photo: S. Kitshoff)
Bulawayo is Zimbabwe’s second largest city and has a population of over 653,000. It is located in the west of the country in Matabeleland, though it is now its own province. The city is an important industrial and commercial centre but it has been heavily affected by the country’s economic crisis. In recent years, almost 100 companies closed down in the city, leading to high rates of unemployment. Many companies have also relocated to the capital, Harare.

The economic crisis has led to rising poverty levels in the region in recent years. Some estimates place unemployment as high as 80 per cent, and poverty at 60 per cent. There has been no serious investment in infrastructure or social services in the region, so poor families fend for themselves lacking the necessary support to help them improve their living conditions. Children are the hardest hit by this, and many of them miss out on an education because they have to contribute to the family’s survival. On the municipal dumpsites on the outskirts of the city, children can be seen picking through the garbage looking for scraps. This exposes them to a number of health hazards. Sometimes whole families live in makeshift shacks near the dumps and scrape a living this way.

Hygiene conditions are precarious for many

The shortage of clean drinking water has very severely affected the population of Bulawayo in recent years. Several years of drought, the economic crisis and the AIDS pandemic have all played their part in leaving many families in a highly vulnerable position. Often, people have to travel several kilometres at least twice a day to get clean water. When people are ill, this can be impossible, so they often end up drinking unclean water, which can lead to a number of diseases, especially in children. Sanitation conditions have deteriorated overall, as people are often unable to use their latrines due to the lack of water. Illnesses such as diarrhoea and cholera have thus been on the rise. Safe and clean water is therefore urgently required, as well as information on good hygiene practices. Health care is also not available to many families, often because they cannot afford the journey to the nearest health clinic.

What we do in Bulawayo 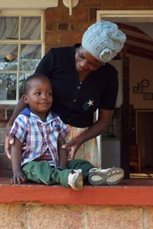 A little boy with his SOS mother (photo: S. Kitshoff)
SOS Children’s Villages first began its work in Bulawayo in 1995.

Strengthen families: In recent years, we have continuously expanded our family strengthening programme in the region so as to reach as many struggling families as possible. The aim is to alleviate hardship and maintain family stability so that children will be safe and protected and grow up in a loving home.

The social centres ensure that children have access to essential health and nutritional services, as well as education. We assist parents by providing guidance on income-generating skills and parenting practices, as well as counselling and psychological support where needed.

Our support goes out especially to adults and children who have been affected by HIV/AIDS. In cooperation with local organisations, we also work towards strengthening the support systems for vulnerable families within the community.

Care in SOS families: For children from the region who are no longer able to live with their parents, 15 SOS families can provide a loving home for up to 180 children. In each family, the children live with their brothers and sisters, affectionately cared for by their SOS mother.

Education: The children attend the SOS Kindergarten in Bulawayo together with children from the neighbourhood, which ensures that they are integrated into the local community from a young age. The children then go on to complete their primary education at the SOS school, which is attended by around 760 pupils.

Support for young people: When young people who grew up in an SOS family feel ready to move out of the family home in order to pursue further education or vocational training, our SOS Youth Programmes continues to support them as they make the transition into adulthood.