Zambian children face a harsh reality. Thousands have been orphaned by AIDS and live a without parental care, many of them in crippling poverty. It is against this background that SOS Children's Villages decided to initiate its work in this South African country.

Zambia remains of the poorest countries in Africa 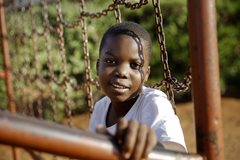 Children in the care of SOS Children's Villages grow up with their brothers and sisters in stable family homes (photo: P. Audestad).

The Republic of Zambia's total population is over 17 million, of which roughly 54 per cent are under the age of 18.

While Zambia was once a thriving copper producing nation; after the 1970s the economy deteriorated and it became one of the poorest countries in Africa. Zambia's political mismanagement and declining copper prices on the world market have been cited as the main reasons for the problems that the country has been facing.

More than 60 per cent of the Zambian population now live in poverty. In rural zones, poverty levels are particularly high and access to even the most basic services such as running water, sanitation and decent housing is limited. Despite the abundance of fertile land, Zambia experiences food shortages on a regular basis. The urban/rural poverty gap has been growing even further over recent years.

Investment in social protection is a central aspect in Zambia's national development plan, which outlines the government's vision regarding poverty reduction strategies. However, its implementation remains a challenge. Quite often, households that are heavily affected by poverty are more vulnerable to HIV/AIDS, droughts and floods..

Because of the social and economic environment, life expectancy in the country remains low at only 57 years. The extent to which the HIV/AIDS epidemic has been affecting Zambia is particularly worrying: at 11.6 per cent, the HIV-prevalence rate is among the highest in Africa. Around 670,000 Zambian children have been orphaned due to AIDS. HIV/AIDS therefore remains a major public health concern in Zambia.

Children are in urgent need of protection 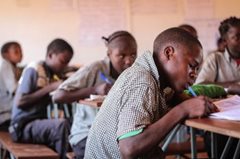 Children in Zambia are highly vulnerable. Children in special need of protection include those who have lost their parents, as well as those who have been neglected by their families, abused or pushed into harsh forms of labour.. Although the legislative framework to protect Zambian children exists and is well stipulated, reality has shown that fighting violations of children's rights remain one of Zambia's biggest challenges.

1,400,000 children in Zambia have lost either one or both of their parents. Children without parental care and those at risk of losing it are in need of special protection. In addition, access to education remains difficult. Without education, the vicious circle that many children and young people experience is likely to continue once they become adults.

Over recent years, a number of campaigns aiming to reduce maternal and infant mortality have been launched. Current figures show that some of these campaigns have turned out to be successful: maternal mortality decreased noticeably to 24 per 1,000 live births.

Although the legislative framework to protect Zambian children exists and is well stipulated, reality has shown that violations of children's rights remain one of Zambia's biggest challenges.

SOS Children’s Villages has been working in Zambia since 1996.

Strengthen families: Since 2002, we have been running SOS Family Strengthening Programmes that aim to enable children who are at risk of losing care and protection of their family to grow up in a caring family environment.

Wherever possible, we work closely with the children’s family of origin, so that they can stay in touch. In some cases, the children can return to live with their families – when this happens we support them during the period of change and adjustment.

Education: Over 1,500 children across the country attend the kindergartens and schools run by SOS Children’s Villages in Zambia.

Support for young people: SOS Children’s Villages supports young people until they are able to live independently. We care for them while they finish their education or training, and look for their first job.