When SOS Children's Villages started supporting vulnerable children and families in Uganda, in 1988, the country was recovering from decades of war and political instability. Conditions have improved over the past years, but around 2.7 million children have no parental care and approximately one million children have lost their parents to AIDS.

Due to violence and HIV/AIDS, thousands of children are without protection 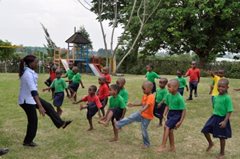 Children in our care during a gym lesson (photo: SOS archives).

Fort Portal is located in western Uganda in Kabarole District and has a population of roughly 50,000. The economy of the region is based predominantly on subsistence agriculture, animal husbandry and commercial fishing in the crater lakes and rivers.

SOS Children’s Villages began its work in the region due to the great number of vulnerable children suffering due to the civil wars, ethnic struggles, and diseases including HIV/AIDS. A 2004 UNICEF survey showed that there were 50,000 orphans in the region, and the number was projected to continue rising. Children who can no longer live with their parents generally live with their extended family in Uganda. But often, families do not have the means to provide for additional children, or they have lost family members, too. Especially when they are female-headed households or older relatives, it can be incredibly difficult for them to meet the children’s needs in financial, social, psychological, educational and health terms.


Support is urgently needed to rebuild a peaceful society

Uganda has suffered incredible violence in the past decades: in a conflict that began in the late 1980s, the Lord’s Resistance Army abducted over 25,000 children, recruited between 60,000 and 100,000 child soldiers, and displaced almost two million people. In the 250 camps for the internally displaced that were set up in northern Uganda at the height of the conflict, up to 1,000 people were dying each and every week, mainly due to malaria and AIDS. A truce was reached in 2006, but the violence continued, affecting neighbouring South Sudan and the Democratic Republic of the Congo too, where over 400,000 people have been displaced since 2008 alone.

Most of the Ugandan internally displaced people have now returned to their hometowns, but settling back into normal life entails countless challenges. Often basic services are missing and families lack support in rebuilding their livelihoods. For widows and orphans it is especially difficult, as they cannot reclaim the land the family formerly owned if the husband or father is dead. Children who experienced incredible violence from a young age can find integrating into society almost impossible, and they urgently need help and psychological support.


What we do in Fort Portal 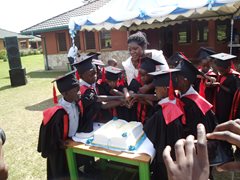 Happy to be graduating from Kindergarten (photo: SOS archives)
SOS Children’s Villages began its work in Fort Portal in 2010. In recent years, we have expanded our family strengthening programme in the region so as to reach as many struggling families as possible. The aim is to alleviate hardship and maintain family stability so that children will be safe and protected and grow up in a loving home. The SOS Social Centre in Fort Portal ensures that children have access to essential health and nutritional services, as well as education. We assist parents by providing guidance on income-generating skills and parenting practices, as well as counselling and psychological support where needed. In cooperation with local organisations, we also work towards strengthening support systems for vulnerable families within the community.

For children from the region who are no longer able to live with their parents, twelve SOS families can provide a loving home for up to 120 children. In each family, the children live with their brothers and sisters, affectionately cared for by their SOS mother.

The children attend the SOS Kindergarten in Fort Portal together with children from the neighbourhood, which ensures that they are integrated into the local community from a young age. The kindergarten also includes one class where children are taught according to the Montessori Method. The children then go on to attend local schools together.