Hundreds of thousands of children in Togo are deprived of their rights. Owing to high levels of poverty and HIV/AIDS, many grow up without any family support at all. Against this background, SOS Children's Villages decided to become active in Togo in the 1970s. Since then, the organisation has been supporting Togolese young people and children via a number of different programmes in order to give them a brighter future. 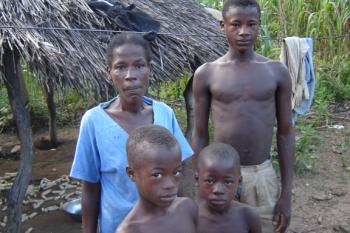 Lomé is Togo’s capital city and with a population of over 1.5 million in its metropolitan area it is also the largest. It is located on the southern coast of the country in the Maritime Region, which covers just one tenth of the country’s land area but is home to 42 per cent of its population; in fact, almost one quarter of the entire Togolese population lives in capital city alone. The city is experiencing rapid growth and is very densely populated. The cityscape is one of great contrasts: wide, tree-lined boulevards and opulent villas coexist with dirt roads and sprawling slums.

Early, forced and polygamous marriages remain the norm in Togo. Although the legal age for marriage is 17 for girls and 20 for boys, girls are very frequently married off before this age. The country’s Personal and Family Code has been under review since 2006 but at the time of writing no changes in legislature had been passed. Polygamy is a concern in the fight against HIV/AIDS as it can contribute to the spreading of the disease. It is estimated that around 54 per cent of married women in Togo today are in a polygamous marriage, and 22 per cent of them are between the ages of 15 and 19. Female genital mutilation also remains common and education and information on HIV/AIDS is not sufficiently available to all.

Single mothers often struggle to provide for their children

Early and polygamous marriage can also have detrimental effects on the children: when a man has several wives, and several children with each wife, it can become impossible for him to provide for each child’s basic needs, both financially and emotionally. Young girls living in severe poverty often resort to becoming an older man’s mistress in exchange for money or gifts. Often, they do not have any education and this is their only survival strategy.

In cases where parents are no longer able to provide for the family due to unemployment and poverty or illness, it is common for children to drop out of education and take to the streets to fend for themselves. These children survive by begging, picking through the city’s large garbage dumps trying to find recyclables to sell on, and sometimes they resort to crime. Children whose parents are no longer able to look after them are exposed to a great many dangers in Lomé and without an education, their hopes of improving their station in life as adults rapidly diminish.

What we do in Lomé 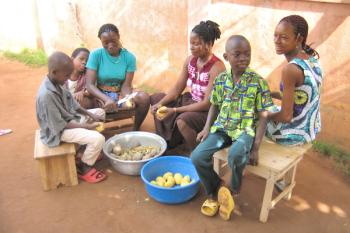 Preparing a family meal at the children’s village (photo: A. Gabriel)

SOS Children’s Villages began its work in Lomé in 1979. In recent years, we have expanded our efforts to reach out to vulnerable families in the surrounding community through the SOS Family Strengthening Programme. We ensure that children have access to essential educational, nutritional and health services, and we support parents in protecting and caring for their children, for example by offering guidance on income-generating skills and parenting practices. We provide counselling and psychological support to both children and their caregivers. Our support goes out especially to families affected by HIV/AIDS.

For children from the region who are no longer able to live with their parents, nine SOS families can provide a loving home for up to 90 children. In each family, the children live with their brothers and sisters, affectionately cared for by their SOS mother.

Around 50 children from the children’s village and the neighbourhood attend the SOS Kindergarten, ensuring that children from SOS families make friends and are integrated into the local community from a young age.

When young people who grew up in one of the SOS families feel ready to move out of the family home in order to study, receive training or find work, the SOS Youth Programme continues to support them as they make the transition into independent adulthood. Of course the young people also maintain close contact with their SOS mother and siblings.