"Jamhuri ya Muungano wa Tanzania" (The United Republic of Tanzania) is currently home to four SOS Children’s Villages. The organisation has been active in Tanzania since the former president of Zanzibar, Ali Hassan Mwinyi, approached Hermann Gmeiner in 1984, requesting that an SOS Children’s Village should be built in his country. In 1991, the first children were able to move into their new families.

The population is expanding – but infrastructure is not 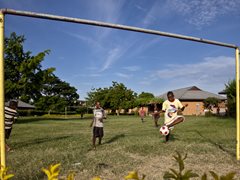 A place where children can be children (photo: SOS archives)

Dar es Salaam was Tanzania’s capital until 1996 and remains the largest city in the country. It is located on the eastern Indian Ocean coast and has a population of roughly 4.4 million (2012). Its seaport makes it an important economic and commercial hub in the region. Although the city is the most developed in the country and poverty levels have been reduced in recent years, living conditions remain very difficult for large sectors of the population. As the city’s population grows, more and more people lack access to basic services. Thousands of people live in slums, and power rationing remains a problem for the entire city. In addition to rapid population growth, internal migration to the city also means additional strain on an already fragile social services system.

Dar es Salaam Region’s tropical climate means there are two rainy seasons each year, one long, one short. In some years, these have been very heavy indeed, causing severe flooding. In late 2011, Dar es Salaam experienced the heaviest rains in over fifty years, which caused a lot of damage. Thousands lost their homes and all their possessions due to the flooding, business activities were suspended, and transport broke down. Due to a lack of infrastructure, city planning, paved roads and drainage systems, the slum areas were hit the hardest. Overcrowded conditions, insufficient knowledge of hygiene measures and the contamination of drinking water mean a constant threat of a cholera outbreak. As more and more people come to the city, the situation in these informal settlements is unlikely to improve.

In the worst case, lacking infrastructure can also lead to the spread of diseases: for example, only around ten per cent of the population are connected to the sewage system. The rest use pit latrines, which often overflow. This poses a serious health hazard. Access to health care is also often limited, especially for vulnerable children. When parents are ill, where children are the head of the household or for children living on the streets access to social services is very difficult. Most of these children are not aware of their rights and are thus even more vulnerable to exploitation, violence, as well as missing out on education. Families need support so that children are not left to fend for themselves at a young age.


What we do in Dar es Salaam

Children playing together outside their home (photo: SOS archives)

SOS Children’s Villages began its work in Dar es Salaam in 2007. Today, a fundamental part of our work here is constituted by our family strengthening programme. The SOS Social Centre focuses on alleviating hardship in the local community by providing a number of services. We ensure that children have access to basic educational, nutritional and health services. We work with parents to help them improve their situation, for example by providing guidance on income-generating activities and parental skills. We also work closely with local authorities and community leaders in order to strengthen the support networks available to vulnerable children and their families. Around 600 children and their adult caregivers benefit from the social centre.

For children from the region who are no longer able to live with their parents, 13 SOS families can provide a loving home for up to 130 children. In each family, the children live with their brothers and sisters, affectionately cared for by their SOS mother.

The children attend the SOS Kindergarten together with children from the neighbourhood, which ensures that they are integrated into the local community from a young age.