In 2011, South Sudan became the fifty-fourth state on the African continent. Since then the country has been marked by political disputes and intermittent violence. The world's youngest independent nation faces tremendous challenges: one out of five people has been forced to flee their homes and around 6.1 million are in need of urgent assistance.

Violence has forced millions to move in search of safety 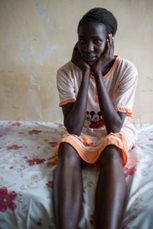 A young girl in our care dreams of peace in her country and of becoming a doctor (Photo: C. Ashleigh).

South Sudan became an independent state in July 2011 after six years of autonomy followed by a referendum in which South Sudan's population voted in favour of independence.

The new nation was full of hope for change and new beginnings. However, these dreams were quickly dashed: violence and economic difficulties have continued to mark the lives of families.

The country is also plagued by disease – there were outbreaks of both malaria and cholera in 2015 and in June 2016 UNICEF warned of an increased risk of another cholera outbreak. These outbreaks are made worse by the lack of sanitation facilities: a staggering 87 per cent of people have no access to improved sanitation.

In spite of its oil reserves, South Sudan remains one of Africa's poorest nations, the majority of the population lives under the poverty line. Approximately 80 per cent of people live in rural areas, where there is limited access to health care, safe drinking water, sanitation facilities and education. The people here rely on crop farming for food. Climate variation and natural disasters therefore affect their lives: droughts or flooding can destroy the harvest and drive thousands into starvation.

The latest fighting has made the situation even more desperate for families who were already struggling to survive. The increasing shortage of food and water has led to more cases of malnutrition. At present nearly one in every three people is severely food insecure, meaning that they don't have enough nutritious food to lead an active and healthy life. International organisations have been working to deliver necessary basic goods and health care in affected areas. However, the unstable situation and lack of infrastructure have caused delays.

Children are badly affected by fighting

SOS Children’s Villages provides care for children who cannot live with their families (Photo: A. Hamer).

Children in South Sudan are in urgent need of protection. Many have lost parental care due to the long-standing conflicts: over 10,000 children are currently registered as unaccompanied, separated or missing.

South Sudan has one of the world's highest child mortality rates in the world. One out of four children under the age of 5 is malnourished – this makes them particularly vulnerable to illnesses.

Although the government has made efforts to guarantee free primary education to South Sudanese children, over one million children do not go to primary school. The recent fighting has made the situation worse: one third of schools has been destroyed, damaged or closed and the education of around 900,000 children has been disrupted.

Care in SOS families: Children whose families can no longer take care of them can find a loving home in SOS families. In early 2014, the SOS Children's Village Malakal was looted, and the families were forced to leave. The children and young people were evacuated to Juba, where they found safety. At first they lived in rented accommodation and later moved into the SOS Children’s Village Juba.

Support for young people: We provide young people with support and training until they are able to find a job and live independently.

Emergency Programme: When South Sudan became independent in 2011, SOS Children's Villages launched an emergency programme to assist some of the unaccompanied children who had returned to South Sudan. We have been working to unite children with their families of origin. More recently, since 2016, we have been supporting children and families who have been affected by the recent violence. We have been providing food, psychological support and meeting their water and sanitation needs. By paying for tuition fees and school materials, we have also been supporting children so that they stay in school.