Children grow up having fun with their brothers and sisters (photo: SOS archives)

Rustenburg is the capital of South Africa’s North West Province and has a population of approximately 500,000. The city is home to the world’s largest platinum mining industry, processing around 70 per cent of the world’s platinum. The Royal Bafokeng Nation, a traditional tribal grouping, own 1,000 km² of land in the North West Province, and the capital of their kingdom is Phokeng, near Rustenburg. Many of the mines in the region are located on their land, too. The rural areas surrounding the city are agricultural.

Due to its industry, Rustenburg has been expanding rapidly in recent years and is now South Africa’s fastest growing city. The steady influx of people has put increasing strain on services and infrastructure. Although the local municipality has put in place a development plan to respond to the needs of the population, it has been difficult to keep up with demand. In early 2012, the need for an additional 90,000 housing units was identified.

Thousands of people live in informal settlements, building shacks on the land illegally. These areas are an eyesore for the municipality, and efforts to get rid of them have included cutting off electricity, which, in turn, has led to strikes and even violent protests in recent years. But waiting lists for low-cost housing are very long, so many people have no other option but to settle illegally. Most of the people who live in these areas on the outskirts of town are rural migrants who came to Rustenburg in search of employment and a better life. However, their lack of skills, training and education often makes it very difficult for them to find formal work.

Many children have to grow up far too soon

The rapid population increase also led to a rise in crime in the city, earning it the nickname “crime capital of the North West”. In addition, Rustenburg has a high HIV prevalence. One of the reasons for this is that miners are generally a high-risk group as in mining areas, where large numbers of labourers come and go, there is an increased risk of the spread of diseases. As a result, there are also a great number of children in Rustenburg who have lost the care of either one or both of their parents or are at risk of losing it because their parents are ill. In many cases, these children drop out of education in order to care for their sick parents. The SOS Family Strengthening Programme reaches out to vulnerable children and their families in Rustenburg, making sure these children are not left without a support network and do not have to take on a disproportionate amount of responsibility at too young an age.

What we do in Rustenburg 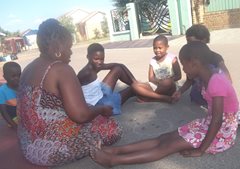 Family-strengthening programme: Today, our SOS Social Centre supports the local population. We ensure that children have access to education and health care. In 2014, we helped over 300 children. Our support goes out especially to those members of the community who have been affected by HIV/AIDS, and we also organise HIV/AIDS awareness and prevention campaigns. In addition, we assist struggling families by providing material support, for example by paying for children’s school fees and uniforms. We also offer counselling and psychological support, and we give parents guidance on income-generating skills. The aim of all our activities is to maintain family stability so that parents can provide a loving home for their children.

Care in families: For children in the region who are no longer able to live with their parents, eleven SOS families in Rustenburg can provide a loving home for children. In each family, the children live with their brothers and sisters, affectionately cared for by their SOS mother. We also support foster families.
The families live in houses that are integrated into the community. The children attend kindergarten and school together with children from the neighbourhood which ensures that they are part of the local community from a young age. All children can spend time together in the sports fields and recreational facilities which are maintained by our organisation.