The legacy of apartheid still affects children’s opportunities in life

Children playing in the garden (photo: SOS archives)
Pietermaritzburg is the capital of the KwaZulu-Natal province and has a population of roughly 750,000.

The city also has one of the largest populations of Indian South Africans in the entire country. Their suffering under the apartheid regime inspired Mahatma Gandhi to begin his fight for racial equality. Today, the legacy of apartheid is still highly visible in the city; in fact, it has been argued that living conditions for the disadvantaged – women and children in particular – have actually declined since the fall of apartheid in 1994. While efforts to resolve the problems inherited from the regime are on-going, diseases like tuberculosis and diarrhoea have been on the rise and life expectancy has declined for the majority of the population.

More than half of the local population lives on less than one US dollar per day. Many have never had a formal, salaried job and have little hope of ever obtaining one. Poverty makes people incredibly vulnerable and often means they don’t have access to education, information or health care. Pietermaritzburg has the highest incidence of HIV infection in South Africa, and the city is also one of the most dangerous for women and children when it comes to sexual offences.

These difficult circumstances have resulted in a great number of very vulnerable children who have either lost the care of their parents already or are at risk of losing it. When a parent falls ill, this can lead to the disintegration of the family, as the parent loses the ability to work and thus their income, rendering them unable to care for their children. This can lead to children going out into the streets trying to scrape together a living in some way, or they may go to live with extended family or grandparents. In many cases, though, children take on the responsibility of caring for their sick parents, sacrificing their education – and their childhood – in the process. Of course experiencing such an incredibly difficult situation at home at a young age can have profound emotional, psychological and social consequences for the child, especially when support networks are not in place.

Children in Pietermaritzburg who have lost the care of their parents are also in danger of being exploited as sex workers or for child labour.

What we do in Pietermaritzburg 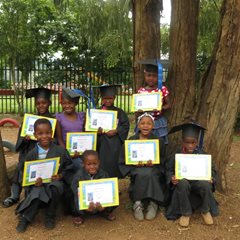 Children from the kindergarten photo: SOS archives)
SOS Children’s Villages began its work in Pietermaritzburg in 1996.

Strengthen families: Today, our SOS Social Centre provides a community-based programme for child care and support to the local population. We ensure that children have access to education and health care. Our support goes out especially to those members of the community who have been affected by HIV/AIDS, and we also organise HIV/AIDS awareness and prevention campaigns.

In addition, we assist struggling families by providing material support, for example by paying for children’s school fees and uniforms. We also offer counselling and psychological support, and we give parents guidance on income-generating skills. The aim of all our activities is to maintain family stability so that parents can provide a secure home for their children.

Care in families: For children in the region who are no longer able to live with their parents, SOS families in Pietermaritzburg can provide a loving home for up to 130 children. In each family, the children live with their brothers and sisters, affectionately cared for by their SOS parent. Some of these families live in houses that are integrated in the community.

While the children are in our care, we work with their families of origin – our aim is to reunite the families. The children attend kindergarten together with children from the neighbourhood, which ensures that they are integrated into the local community from a young age.

Supporting young people: Due to the economic situation in the country, it is often difficult for young people to find a job and become independent. SOS Children's Villages supports them while they attend further education and receive training. We also help them find work.