The legacy of apartheid still affects children’s opportunities in life 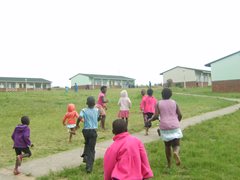 Children plaing in the garden (photo: SOS archives)
Mthatha is located in Oliver Tambo District in the Eastern Cape Province, north of the provincial capital Bisho. Former state president Nelson Mandela was born in a small village not far from Mthatha. Today, the city has a population of roughly 150,000 but it is the main urban service centre for around 1.5 million people from the surrounding region.

Mthatha’s infrastructure is under a great amount of pressure: the sanitation system often collapses, causing raw sewage to flow directly into rivers and, in turn, endangering the health of the local population. Many roads are pot-holed and in bad shape, endangering people’s safety. The city streets and pavements are bustling with illegal bakkie taxis offering their services and hawkers selling their goods.

Poverty levels are very high here: an estimated two-thirds of the local population are unable to meet at least one basic need, such as health care or a balanced diet. The economy of the region reflects the inherent class and racial divides that continue to exist: black Mthatha residents – who make up 96 per cent of the local population – have a much lower average annual income, and the larger firms in the region are still predominantly white and Indian owned.

Most people here make a living in the informal sector, with thousands of hawkers competing for customers on the city streets, selling fruit and vegetables, offering tailoring services or doing hairdressing. An estimated 86 per cent of them are female, as many men migrate to other regions in search of work, leaving the women to care for the family. Child care facilities are not sufficiently available, so in many cases women have no other option but to take their young children with them to work. For these women, day-to-day survival is a struggle: over 60 per cent of them make less than 500 Rand (61 US dollars) per month.

Oliver Tambo District is one of the poorest regions in South Africa. Unemployment is at 77 per cent overall and higher in rural areas, and access to basic services is limited. 35 per cent of the rural population has to travel more than an hour to reach the nearest hospital, costing them up to ten per cent of their monthly income. Access to education is also limited for the same reasons, and over 60 per cent of the local population is illiterate. The SOS Social Centre in Mthatha offers a family strengthening programme, which identifies families in need in the surrounding areas and provides support.

What we do in Mthatha 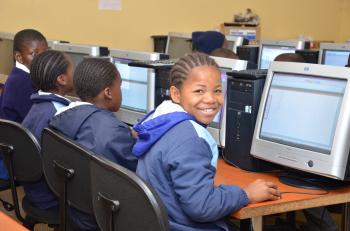 In the computer lab at the primary school (photo: SOS archives)
SOS Children’s Villages began its work in Mthatha in 1997.

Family strengthening: Our SOS Social Centre provides assistance to the local population. We ensure that children have access to education and health care. Our support goes out especially to those families who have been affected by HIV/AIDS, and we also organise HIV/AIDS awareness and prevention campaigns. In addition, we assist struggling parents by providing material support, for example by paying for children’s school fees and uniforms. We also offer counselling and psychological support, and we give parents guidance on income-generating skills. The aim of all our activities is to maintain family stability so that parents can provide a loving home for their children.

Care in families: For children in the region who are no longer able to live with their parents, 13 SOS families in Mthatha can provide a loving home for up to 130 children. In each family, the children live with their brothers and sisters, affectionately cared for by their SOS mother.