During the country's 10-year civil war, thousands of children were used as combatants. In 2014, the Ebola epidemic brought even more hardships to one of Africa’s poorest countries. Against this background, SOS Children's Villages has played a vital role in helping the country's most vulnerable segments of population: children and young adults.

Young people in Freetown struggle to build a life for themselves 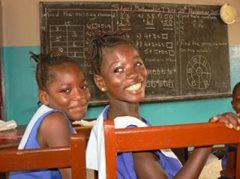 Freetown is the capital and, with a population of over one million, the largest city of Sierra Leone. During the civil war, an estimated two million people lost their homes and their livelihoods. Today, levels of poverty continue to be extremely high and the inequality of wealth distribution remains very pronounced in Freetown. The Ebola epidemic has made things worse because the price of basic products has increased. These difficult socioeconomic circumstances lead many parents to send their children out to work, in order to help the family survive. In 2010, an estimated 48 per cent of children aged five to 14 in Sierra Leone were working.

Early marriage is common, too, with almost 20 per cent of girls married before the age of 15 and 48 per cent married by the age of 18. Most women go on to have large families, and 40 per cent of girls give birth to their first child before the age of 18. Literacy rates amongst young people remain very low: only around 68 per cent of males between the ages of 15 and 24 know how to read and write and just 48 per cent of females do. Although schools have been rebuilt and are technically free, many families cannot afford administrative fees, school uniforms and materials, and schools are often understaffed. In mid- 2014 the situation worsened, as schools were shut in order to prevent the spread of the Ebola virus.

Holistic and sustainable support for the local community

SOS Children’s Villages began its work in Freetown in 1974, as the first programme in Sierra Leone and one of the first in Africa. The nature of our work in the country has varied and was deeply affected by the civil war, during which our efforts focused on emergency relief.

Thousands of families had to flee their homes during the war and at one time, as many as 2,000 people sought refuge at SOS Children's Village Freetown. In 1999, SOS Children's Villages started an emergency relief programme for some of the 30,000 people who had fled from the street fights and had taken refuge inside the Freetown sports stadium: medicine, food, clothing, blankets and tents were distributed.

Although the situation in Freetown has been more stable for some years now, recovery work in the areas of roads, water and sanitation, health care and others are still on-going. Today, the SOS Social Centres in Freetown offer family strengthening programmes to the local community, and we provide support to street children.

What we do in Freetown

Women from the community receive sewing machines so that they can generate income (photo: O. Touray)

For children from the region who can no longer live with their parents, 14 SOS families can provide a loving home for up to 140 children. In each family, the children live with their brothers and sisters, affectionately cared for by their SOS mother.

The children attend the SOS Kindergarten together with children from the neighbourhood. This ensures that children from SOS families make friends and are integrated into the local community from a young age. The children then go on to complete their education at the SOS Hermann Gmeiner primary and secondary schools in Freetown.

One of the main goals of the SOS Family Strengthening Programme is to ensure that families have access to essential basic amenities such as health care, education and food. We also run a social centre for children with special needs, which is the only facility of this kind in the region.
When young people from the children’s village reach an age where they are ready to move out of the family home, the SOS Youth Programme makes shared accommodation available. Qualified SOS co-workers accompany and support the young people on their journey to becoming independent adults.

In 2014, extensive renovation work on SOS Children's Village Freetown began, in order to improve the support we were able to offer children and families in the area.

During the Ebola outbreak in 2014, SOS Children’s Villages has ensured that the children in our care remain healthy. The children have stayed in the village and specially trained teachers have continued their schooling there. The SOS Children’s Villages school and kindergarten have been shut to prevent the spread of the virus. In addition, we have provided advice, food, protective gear and disinfectants to the local families.