Although their country is rich in uranium, the people of Niger are among the poorest in the world. Livestock and crops are frequently devastated by catastrophic droughts which drive millions into starvation. In Niger, tens of thousands of children live in precarious socioeconomic conditions.

At the mercy of nature

Dosso, a city of 45,000, is the capital of the department of the same name located south-east of the country's capital Niamey. Niger's economy largely depends on subsistence farming, livestock, uranium mining and the informal sector.

Thousands of parents in Niger have seen their children die of hunger. Child malnutrition is more widespread than in any other African country. The Dosso region is deeply affected by the problem of desertification and extreme degradation and thus marked by widespread poverty. The area is strongly dependent on climatic factors, in particular precipitation.

Frequent droughts and locust invasions make food insecurity one of the biggest development issues in and around Dosso. During periods of drought, the harvest only lasts for a few months and the local population is left with no money to buy food. Many families take their children out of school because they depend on the extra income generated by them.

The majoritiy of Niger's poor live in rural areas of the country. The Dosso and Maradi regions are particularly hard hit by poverty: Taken together, they account for roughly two thirds of Niger's poor population. Although improving both child and maternal health has been a key priority of the government, figures continue to show a rather worrying picture. Child mortality in Dosso is higher than nearly anywhere else in the country. Niger's extremely high under-five-mortality rate is also closely linked to malaria infections. Malaria is endemic in the country and accounts for around half of child deaths under the age of five. Economic migration has also affected the area as many young Nigeriens leave the Dosso region in search of a better life in neighbouring Nigeria.

The work of SOS Children's Villages in Niger began in the 1970s. As a result of poverty, a considerable number of families in the Dosso region break apart. In addition to the HIV/AIDS pandemic and migration issues that affect the youngest segment of Niger's population, many parents do not have the financial means to raise and protect their children. Consequently, many of them end up orphaned and without parental protection and support. In order to improve the situation of tens of thousands of children in the region, SOS Children's Villages decided to build an SOS Children's Village in Dosso.

What we do in Dosso 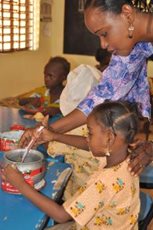 A teacher helps a little girl in the SOS Kindergarten in Dosso. (photo: SOS archives)

SOS Children's Village Dosso is very well integrated into the surrounding community and appreciated for the services it offers to the local population. It has been providing help and support to the people in the region since 2010.

Our package of services includes loving homes for children who grow up without parental care, medical treatment, schooling and counselling. The SOS Children's Village comprises twelve SOS families where up to 120 children can be cared for by loving SOS mothers. It also includes a kindergarten. The children attend the SOS Kindergarten together with children from the neighbourhood. This way, it is ensured that they are integrated into the community from a young age

At our SOS Social Centre, people from the region receive counselling and psychological support by qualified staff. Education is clearly seen as the fundamental pillar of an independent life. Therefore, around 200 students receive quality education at the SOS Hermann Gmeiner School in Dosso.