Although their country is rich in uranium, the people of Niger are among the poorest in the world. Livestock and crops are frequently devastated by catastrophic droughts which drive millions into starvation. In Niger, tens of thousands of children live in precarious socioeconomic conditions.

High levels of poverty in spite of natural resources 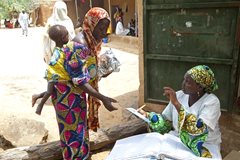 The Republic of Niger is a landlocked country that is situated in Western Africa. At present, the total population of Niger is 17.4 million .The capital of West Africa's largest nation is Niamey and the official language is French.

Natural resources seem to be a curse in Niger: despite the country's oil and uranium depots, the majority of Nigeriens face a life in poverty. Just like in so many other African countries, the benefits of geological blessings fail to reach the local population. Niger heavily depends on foreign development assistance and the work of non-governmental organisations. Apart from uranium, the economy of Niger is centred on small-scale farming and livestock.

The vast and arid Niger is a country heavily affected by extremely high levels of poverty. Around 63 per cent of its population are considered poor and development aid accounts for roughly half the country's total budget. On average, the life of a Nigerien is not only full of hardship but also comparatively short as life expectancy in the country remains low at 55 years. Although there has been some progress lately with regards to alphabetisation, only 35 per cent of Niger's population know how to read and write. Nearly 30 per cent of the population are undernourished.

During times of drought, millions find themselves on the brink of starvation. In 2005, thousands were starving to death as a result of locust invasions and an absence of desperately needed rainfall. In 2010, up to ten million people across the Sahel faced acute hunger, again with Niger being at the very centre of the crisis. Due to high levels of poverty and a lack of infrastructure, hygiene conditions are often precarious. Although "urban poor" also exist, the majority of poor Nigerien's reside in rural or semi-rural areas of the country. More than half the country's rural population remains without access to drinking water, and only four per cent of Nigeriens in non-urban zones have access to decent sanitation facilities.

At a prevalence rate of only 0.5 per cent, HIV/AIDS does not affect Niger to the same extent as it affects many other African nations. However, as per 2012, an estimated 46,000 people were living with the disease. Niger remains both a source- and destination country for human trafficking and thousands of people still live in conditions of servitude. Women and young girls are often taken to neighbouring countries, where they are exploited for commercial sex work.

Children are in need of protection 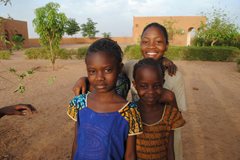 Children in our care grow up with their brothers and sisters in a secure environment (photo: SOS archives)

Demographically speaking, Niger is an extremely young country: around 50 per cent of the population are less than 14 years old. As usual, children represent the most vulnerable population group in such a poor country. The under-five-mortality rate remains very high at 114 per 1,000 live births and the infant mortality rate is one of the highest in the world. No other country in the world surpasses Niger's fertility rate of 7.6 children born per woman. 27 per cent of all Nigerien children are born with low birth weight and around 40 per cent of all children under the age of five are underweight.

Thousands of children are involved in small-scale mining, primarily of uranium, tin and coal, where profits are traditionally low and the risks involved are high. Others risk their lives working in stone quarries. Children are exposed to a number of risks such as injury from work-tools, scalding from hot water or burns from fire. The mining activities often prevent children from attending school. Without an education, the vicious cycle of poverty is likely to continue once the working child becomes an adult.

The work of SOS Children's Villages in Niger began in the 1980s.

Strengthening families: We work directly with communities to empower them to care for their children. Each family strengthening programme provides different services which can include counselling, training so that parents can set up small businesses, and workshops on child protection and health care.

Care in families: Children who have lost parental care can find a home in SOS families in SOS Children’s Villages Dosso, Niamey and Tahoua. Brothers and sisters grow up together and are cared for by an SOS mother, who ensures that they receive the support they need.

Support for young adults: Our SOS Youth Programmes provide young people with support until they are able to live independently.

Education: We run kindergartens and primary schools in Dosso, Niamey and Tahoua.

Health services: Medical care is not always available or affordable to many families. The SOS Medical Centres carry out routine check-ups and vaccinations and treat infections.

Emergency Programmes: In 2015 we started providing assistance to vulnerable families in the south-eastern region of Diffa. The region is affected by natural disasters and violence. We provide educational support, food, shelter, and medical care.