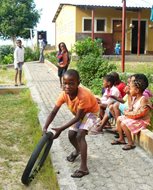 Children growing up in our care in SOS Children’s Village Inhambane (photo: SOS archives)
Inhambane, capital of the homonymous province, is located on the eastern coast of Mozambique in the Bay of Inhambane and has a population of approximately 65,000. The town developed as a centre of the ivory and slave trade in the colonial era. The region is predominantly agricultural and produces corn, beans and rice, to name a few, and it also has fishing and tourism industries.

Absolute poverty has been successfully reduced in Inhambane Province, from 82.6 per cent in 1996 to 57.9 per cent in 2009. But, as in other regions in Mozambique, life as a subsistence farmer is increasingly difficult and food security is severely affected by factors such as drought or flooding, global food and fuel prices, as well as a lack of training in modern farming methods and equipment. These difficult living conditions affect all levels of society, but children are hit the hardest by the limited availability of food: 34 per cent of children under the age of five are malnourished.

But the majority of the population in this farming region has few alternatives: only 1.3 per cent has completed secondary school, 62 per cent has no professional qualifications whatsoever, and around 40 per cent of men and 53 per cent of women are illiterate. Although primary school enrolment in the south is high at 85.9 per cent, secondary school enrolment is as low as 17.2 per cent. Unemployment, too, is high in Inhambane at around 40 per cent.

Children need a healthy and secure childhood, and lots of hope for the future

These conditions can be detrimental to health, especially when it comes to waterborne infectious diseases. Malaria, too, continues to be a problem with over 300,000 cases each year. There are also over 300,000 people living with HIV/AIDS in Inhambane Province, of which only 5,370 are receiving anti-retroviral treatment. Mental health is another concern, as there are only five health centres in the province where psychological assistance is offered. Overall, life expectancy in Inhambane Province is slightly higher than the national average of 48 years, but at just 50 years of age it is still shockingly low.

What we do in Inhambane 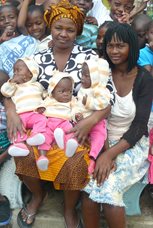 Family strengthening: SOS Children’s Villages ensures that local children and families have access to essential educational, nutritional and health services. We provide assistance to families affected by HIV/AIDS, for example through counselling services and medical care provided in cooperation with local organisations.

Care in families: For children from the region who are no longer able to live with their parents, SOS families can provide a loving home for up to 150 children. In each family, they live with their brothers and sisters and are affectionately cared for by their SOS mother.

The families live in different districts throughout the town. Children are well integrated into the community, and continue to go to the same school and meet their friends in their spare time.

Emergency Programme: After cyclone Dineo in February 2017, SOS Children’s Villages immediately provided shelter, sanitation and support to local families. We will also helped with rebuilding homes and schools, and provided for children who have lost parental care.