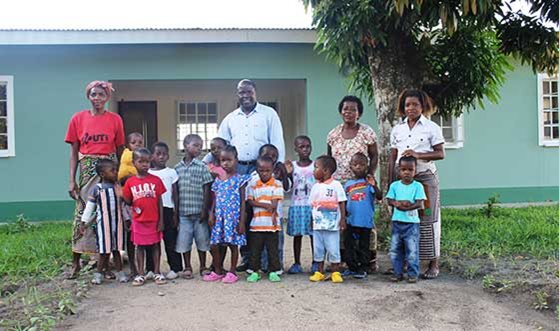 Beira is the second largest city in Mozambique. It is located on the Indian Ocean and is an important port which also acts as a gateway for neighbouring land-locked countries.

The region was badly affected by the civil war: schools and health care facilities were damaged. In rural areas, unexploded land mines have put an end to traditional subsistence farming, and many people moved to Beira in search of new opportunities.

As the city grew, the infrastructure and services have not been able to keep up. People who moved to the city found it hard to find appropriate housing and have often ended up living in slum-like conditions; they have limited access to safe drinking water, sanitation, health care and education. To make matters worse, these shelters are often built in areas which are prone to flooding.

Children who grow up here will seldom get a good education. Although in recent years the enrolment rate has improved, the quality of schooling remains low. In addition, many children have to travel far to get to school and often arrive with an empty stomach, which makes it difficult for them to concentrate on learning.

Many families with children are affected by HIV/AIDS: the region has one of the highest prevalence rates in the country. Unfortunately there is a shortage of treatment and care for people suffering from the disease. As parents become ill, they are unable to care for their family and children are forced to take on the caring and supporting roles. They will often stop attending school and have to find a way of making some money. Many children end up losing their parents. In the past the extended family would have taken responsibility for these children, but it is hard for families to do so if they themselves are struggling.

There is a growing number of children who are in need of support. Alarmingly, more and more children live on the streets in Beira; they often end up being exploited; they work under dangerous conditions, and are exposed to violence, abuse and neglect. These children will feel the effects of growing up in poverty throughout their lives: with little education and poor health it will be hard for them to break the cycle of poverty.

An increasing number of children in need of support

In spite of the government's best efforts to improve the situation of children and vulnerable people, the number of children needing care in Beira is increasing. For this reason, SOS Children's Villages was contacted by the local government. We were already working in four other locations in Mozambique, and in 2011 we started supporting vulnerable families and children in Beira. Most of the families are either affected by HIV/AIDS or headed by a child or woman. Female headed households usually have more members to support and are poorer due to the low levels of education and lack of earning potential.

What we do in Beira

An SOS family in front of their home (photo: SOS archives)

Psychological support and counselling are also offered. The focus is on families who are at risk of breaking down, especially those affected by HIV/AIDS. Through these programmes we aim to reach over 1000 children and 250 adults.

Children who are no longer able to live with their families can grow up in one of the 15 SOS family homes. They live alongside their brothers and sisters and are cared for by their SOS mother.