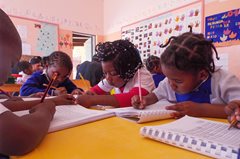 Even for Sub-Saharan Africa standards, Mozambique is a very poor country: 72 per cent of the population lives in poverty. Families are struggling to cover even their most basic needs, such as running water, proper sanitation and regular access to food. Income distribution remains highly unequal in a country where the richest twenty per cent control over half of the national household income.

A few years after peace could be secured in Mozambique, disastrous floods destroyed much of the country's infrastructure during a time in which it was slowly rebuilding itself. Rural Mozambique is frequently affected by droughts. Famine is widespread and many locals suffer from illnesses that are directly related to it. For the average Mozambican, life expectancy is as low as 58 years. The country has one of the highest HIV rates in the entire world: 12.3 per cent of the population are HIV-positive, meaning that roughly 3.6 million Mozambicans are living with the disease.

In March 2019, the coastal city of Beira was hit by a tropical cyclone that affected 1.7 million people across Mozambique, including an estimated 260,000 children. Devastating floods damaged bridges and roads, which stopped the delivery of food and other emergency supplies. Public water supplies were unable to be treated, leaving many Mozambicans susceptible to water-borne diseases such as cholera and malaria. Up to an estimated 50 per cent of the annual crop production was destroyed, leaving many without food or means to an income

Although there have been impressive steps forward in terms of school enrolment, only 40 per cent of children who attend school complete their primary level education. From this, only 16 per cent of children go on to secondary education. Factors such as lack of safe school spaces and early marriage and pregnancy are major reasons for children to not complete school. Around 40 per cent of girls have given birth before they are 18 years old, and half are already married.

An estimated 1.2 million children do not attend school at all. At least a basic level of education is of considerable importance for growth and development and empowers the child to break the vicious circle of poverty when becoming an adult. On average, Mozambicans complete only 3.5 years of schooling.

Mozambique is a strikingly young nation, with children representing over half of the population. Despite rapid and sustained improvements in terms of general economic development, many children are still facing a life full of hardships. Almost one third of children are left in inadequate care. Although this figure is steadily decreasing, at 72 per 1,000 live births, the country's under-5 mortality rate is still one of the highest in the entire world.

Approximately one third of Mozambique's 2.1 million orphans have lost their parents due to the persistent HIV/AIDS pandemic that the country has been facing. Orphans are less likely to attend school on a regular basis as many of them have to engage in labour activities in order to eke out a living. Many orphaned children end up in the streets of major cities, where they are often sexually exploited, and criminal activities and drug abuse become part of their everyday life.

Strengthening families: Since 2011, SOS Children’s Villages has worked with local communities in Mozambique to support vulnerable families so that they can stay together. We ensure that they have access to basic goods and services such as health care and education, in order to enable them to effectively protect and care for their children.

Care in SOS families: If, in spite of all support, children are unable to stay with their parents, they can find a new home in an SOS family in one of our 6 SOS Children’s Villages in Mozambique. Here children grow up with their brothers and sisters in a safe environment.

Wherever possible, we work closely with the children’s family of origin, so that they can stay in touch. In some cases, the children can return to live with their families, and when this happens, we support them during the period of change and adjustment.

Support for young people: We provide young people with support and training until they are able to live independently.

Emergency Relief programme: Mozambique is frequently affected by natural disasters. As well as providing immediate support, shelter and sanitation facilities to prevent the spread of infectious diseases, SOS Children’s Villages also focuses on preventing the separation of children and families, and ensures that they are given psychological and health care support.