Although the island nation of Mauritius is characterised by political and economic stability, a proportion of people still find themselves on the bottom steps of the socioeconomic ladder. Child trafficking and child labour are some of the problems that persist. SOS Children's Villages is working to protect the country's must vulnerable young people and children.

The town of Bambous has a population of around 15,000 and is the capital of the Black River District in western Mauritius. The region is the country’s largest but most sparsely populated and is home to unique tropical forests.

Mauritius is on track to reach its UN Millennium Development Goals for 2015, and has already fulfilled some of them: primary education and health care, for example, are now freely available to all Mauritians. However, in rural areas many families continue to face a very difficult day-to-day reality. Only around one per cent of Mauritians live below the official national poverty line of one US dollar per day, but many still struggle to afford basic goods: living costs on the island are very high, as 75 per cent of all commodities, including food and petrol, are imported.

In rural areas, many families rely on farming or fishing for their livelihoods, but the income they are able to generate this way is minimal. In addition, many families do not have enough land to grow sufficient food, and soil erosion, over-grazing, as well as droughts and cyclones pose a threat. In coastal areas, over-fishing has become a great concern, too. Unemployment rates have been on the rise in recent years, reaching eight per cent in 2012. Most severely affected are women and young people – youth unemployment is as high as 21 per cent. Single mothers, especially when they lack education, have a very hard time finding employment.

For children from struggling families, life bears many risks

Infrastructure is also less readily available in rural areas: for example, ten per cent of the rural population do not have improved sanitation facilities. In addition, almost 13 per cent of women in Mauritius are illiterate, and around nine per cent of men cannot read or write.

Children from struggling families start out at a certain disadvantage in life: they are at greater risk of suffering from malnutrition, dropping out of education, becoming entangled in a life of drug abuse or crime, living on the streets, or in the worst cases they may be exploited for child prostitution, which has been on the rise in poorer neighbourhoods.

What we do in Bambous 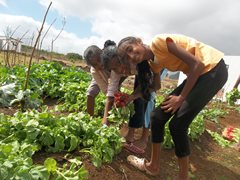 Children having fun as they harvest fresh vegetables for lunch (photo: SOS archives).

SOS Children’s Villages began its work in Bambous in 2003.

Strengthening families: The family strengthening programme aims to alleviate hardship so that families are not in danger of breaking up and children can enjoy a secure and loving home life. We ensure that children receive everything they need for their healthy development, from education and medical treatment, to nutrition and social activities. We also offer parents guidance on income-generating skills and parenting practices. The overall aim is provide families with the skills and knowledge to become self-sufficient in a sustainable manner.

Family-based care: For children in the region who are no longer able to live with their parents, seven SOS families can provide a loving home for up to 120 children. In each family, the children live with their brothers and sisters, affectionately cared for by their SOS mother. Once the children turn 11, government policy requires boys and girls to live in separate houses. At this point, the children move into new SOS families in the village where boys live only with other boys, and girls with other girls. They continue to be cared for by SOS mothers and to take part in joint activities.