The people of Mali face recurring droughts, persistent poverty and outbursts of violent conflict. Education and health facilities leave much to be desired. Nearly 48 per cent of the population is under the age of 14; these children are among the poorest in the world and thousands are without parental care. SOS Children's Villages is currently providing vital support to families and children in four permanent locations throughout the country. 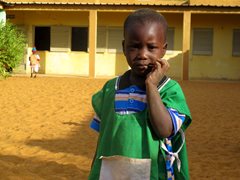 Thanks to the support from SOS Children's Villages, this little girl can go to school and visit the doctor (photo: K. Thomas).

Socoura is a small town located in the Mopti Region of Mali, one of Africa's most forgotten corners. Nowhere else is poverty more pronounced than here. Although government initiatives have brought some much-needed economic progress over recent years, roughly 80 per cent of the population continues to live below the poverty line. The Mopti region remains marked by extraordinarily high levels of illiteracy as access to education continues to be limited. Instead of sending their children to school, families often depend on them as workers in the fields. Among the factors that contribute significantly to poverty are rural isolation, no access to social services and extremely low incomes.

The violence and threats of food insecurity are endangering children

In March 2012, a military coup ousted President Touré while rebel groups in the north of the country were fighting for control of the region. Hundreds of thousands of people were forced to leave their homes. Many settled with family and friends or in special camps in the southern parts of the country.

The combination of drought and violent fighting resulted in a shortage of food in 2012. SOS Children's Villages started an Emergency Programme to support vulnerable families. In 2013, a new Emergency Programme supported displaced families. In addition to food and nutritional advice, we offered psychological support to adults and children who had suffered traumatic experiences. Some families were keen to go home once the situation became safer and SOS Children's Villages provided help that included safe transport home.

What we do in Socoura 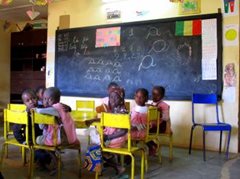 Many children do not know how to hold a crayon when they arrive at the SOS Kindergarten. By the time they leave they can recite the alphabet and write their name - feats normally reserved for the first year of primary school (photo: K. Thomas).
SOS Children's Village Socoura was officially inaugurated in 1997 and has been supporting the local community ever since, including a programme to strengthen families, loving homes for children without parental care, schooling and a kindergarten.

However, in April 2012, the fighting in the north of the country threatened to spread further and further south. Consequently, the 140 children and co-workers living at SOS Children’s Village Socoura had to be evacuated and were moved into the two southern Children’s Villages in Kita and Sanankoroba. The SOS families in the south warmly welcomed the families from Mopti into their homes. The children attended the SOS Kindergarten and school there and did very well. In July 2013, when the area was once again safe, children were able to return to SOS Children's Village Socoura.

Many SOS co-workers decided to stay behind in Mopti, they provided support to the people fleeing the fighting in the north. In addition to the SOS Family Strengthening Programme, the SOS Hermann Gmeiner Schools and the Kindergarten continued to operate for the children of families from the local community. We tried to give the children a sense of stability by allowing them to continue their education despite the difficult situation.