Life is extremely challenging in Liberia due to high poverty levels, post-war trauma and economic struggles. More recently, the Ebola virus epidemic caused further suffering: over 4,800 people died and many more were affected and are trying to rebuild their lives.

Children in our care are able to grow up in a safe environment - playing and going to school with their friends (photo: C. Ladavicius).

SOS Children’s Village Juah Town is located 40 km inland from Liberia’s third-largest city Buchanan, in Grand Bassa County. Liberia has recently emerged from over two decades of civil war that left 250,000 dead and plunged the country into economic devastation. SOS Children’s Villages was one of the few relief organisations that stayed in the country during this time.

But the story of SOS Children’s Village Juah Town has been eventful, to say the least, and fraught with difficulty: we initially started our work here in 1989, but as the war intensified in the country’s interior, Juah Town was no longer safe and the children’s village could not start operating. In the following years, the children’s village was occupied by militia soldiers. In the year 2000, we were able to fully renovate all the buildings, and the first children could move in. However, due to heavy fighting and the precarious situation in the region, the children’s village had to be evacuated once again in 2003. The children and SOS co-workers moved to the SOS Children’s Village in Monrovia, where they were safe until the end the end of the civil war.

Negotiations for a peace deal in Liberia began in 2003, and in 2005 democratic elections were held. SOS Children’s Village Juah Town once again opened its doors in 2005 and has been supporting the local community and vulnerable children in the region uninterruptedly since then. In a historic ruling, warlord and former president Charles Taylor was convicted of war crimes by an international court in 2012.

Holistic and sustainable support for all members of the community

Today, there is a great need for support within the communities of Grand Bassa County, and children are as vulnerable as ever. Liberia’s unemployment and poverty rates have reached all-time highs. Today’s children are at great risk of growing up to be a generation of impoverished citizens.

Thousands of children in Grand Bassa County die from malaria each year, and 20 per cent of all child deaths occur due to preventable diseases such as diarrhoea and cholera. Much of the infrastructure of the county was destroyed during the war, so schools and health centres are in a terrible condition. Up to 81 per cent of girls and young women are illiterate. Many children have experienced more years of war and fighting than of peace; the psychological suffering caused by such experiences can lead to traumas, nightmares, emotional problems and anxiety.

As of 2010, the SOS Social Centre in Juah Town provides a family strengthening programme to around 700 beneficiaries in the local community, ensuring that families have access to basic education, medical care, and material assistance. We offer day-care for the children of working parents, training opportunities to help parents find income-generating activities and become self-sufficient, psychosocial support, as well as information on hygiene and nutrition. Families that are struggling to survive receive food rations for as long as they need them. Our nurses at the social centre have received special training to diagnose and treat malaria. The family strengthening programme has helped many families to become more stable and secure.

What we do in Juah Town 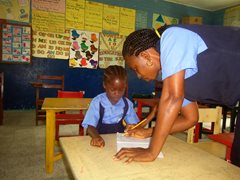 At the SOS Children's Villages Kindergarten, children make a good start to their schooling (photo: C. Ladavicius ).
For children in Grand Bassa County who are no longer able to live with their parents, twelve SOS families can provide a loving home for up to 120 children. In each family, the children live with their brothers and sisters, affectionately cared for by their SOS mother.

The children attend the SOS Kindergarten together with children from the neighbourhood and from the family strengthening programme. This ensures that the children make friends and are integrated into the local community from a young age.

The children then go on to complete their primary and secondary education at the SOS Hermann Gmeiner Schools in Juah Town. Over 300 pupils attend the schools, enabling many children to get an education whose parents could not otherwise afford to send them to school.