SOS Children's Villages in Kenya is supporting children within their community and in their familiar environment. Apart from giving children a new home in our villages, SOS Family Strengthening Programmes enable children who are at the brink of losing family care to grow up in a caring family environment. 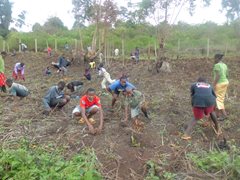 Meru is located in Meru County in central Kenya and has a population of over 240,000. The town is situated about five miles north of the equator, at the foot of Mount Kenya. The region’s economy is based primarily on agriculture and the population make a living in small-scale farming. The social relations between ranchers, small-hold farmers and pastoral herders have historically been tense due to the limited availability of grazing land, especially in times of drought.

Women in Meru tend to marry young and go on to have large families. Around 20 per cent of women have their first child, and 40 per cent of women are married, before they are 18 years old. Domestic violence as well as corporal punishment remain very common in the region. A 2008 survey conducted by the Kenya National Bureau of Statistics showed that around 82 per cent of children in the region experience psychological or physical punishment in the home. In the same survey, 68 per cent of women stated that they believed it justified for a husband to beat his wife, for example if she goes out without telling him, refuses to have sex or burns the food. Around 25 per cent of households have to travel one hour or more to collect water, and in 68.5 per cent of cases, this is the woman’s job.

SOS Children’s Village provides care for children in the region who can no longer live with their parents or relatives. We ensure their safe and healthy upbringing, as well as their education, and we give each child a loving home.

What we do in Meru 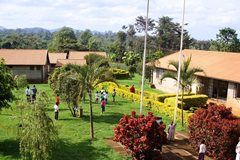 The children in our care grow up in a safe and supportive family home (photo: SOS archives).
SOS Children’s Villages began its work in Meru in 2005. The children’s village is located on the outskirts of Meru, in the middle of one of the most densely populated areas of Kenya. Social facilities are not sufficiently available in this region, so the presence of SOS Children’s Villages makes an important contribution to the wellbeing of the local population.

For children from the region who can no longer live with their parents, 13 SOS families can provide a loving home for up to 130 children. In each family, the children live with their brothers and sisters, affectionately cared for by their SOS mother.

The children attend the SOS Kindergarten together with children from the neighbourhood. This ensures that children from SOS families make friends and are integrated into the local community from a young age. The kindergarten also includes one class for children with special needs, where they are taught according to the Montessori Method of teaching.