In 2014, Guinea declared a national health emergency due to the outbreak of the Ebola virus disease. By early 2016, over 2,500 people had died and nearly 6,000 children had lost parental care due to the epidemic. The epidemic has had serious effects on the country's already fragile social and economic fabric.

Abject poverty and hunger are a daily reality for thousands

An SOS family in the garden (photo: SOS archives).

N'Zérékoré is Guinea’s second largest city with an estimated population of between 250,000 and 300,000. It is located in the very south of the country near the border with Liberia. The city’s population has almost tripled since 1996, not least due to the influx of refugees from neighbouring Liberia, Sierra Leone and Côte d’Ivoire fleeing the civil wars in those countries.

In 2012, there were 2,000 new arrivals from Côte d’Ivoire, in addition to almost 14,000 refugees from Liberia and other countries. Some of these forcefully displaced people may be able to return to their homes once the situation there has stabilised; others may choose to stay. What makes the situation more difficult are the socio-economic conditions and the fragile political environment in the entire region.

A huge problem that continues to affect West Africa, Guinea included, is the high degree of violation of children’s rights, with thousands being sold and trafficked each year. There are also many cases of children migrating on their own, often to escape a difficult situation at home, be it abuse or simply food scarcity. These children may seek employment in bigger cities with the aim of sending money home to support their families, but they become incredibly vulnerable to exploitation, violence and abuse. Usually, they end up begging in the streets and are deprived of an education, thus jeopardising their chances in later life.

A life of dignity begins with meeting basic needs

The entire Sahel zone is also affected by frequent periods of drought leading to chronic food insecurity. Combined with rising prices for imported rice and wheat, thousands of people are at risk. As Guinea imports a large proportion of its rice, any fluctuation in global prices severely affects the population. Children are particularly vulnerable to malnutrition and it can have serious, often irreversible effects on their physical and cognitive development. 40 per cent of children under the age of five in Guinea suffer from stunting, meaning they are below their age-appropriate height.

There is an urgent need in the region to stabilise the living conditions of the population and safeguard people’s health and wellbeing. If the basic needs – such as food, education, or employment – of the community are not met, children will continue to be forced to migrate and work, be in danger of trafficking, abuse and exploitation, and their healthy development will continue to be under threat.

What we do in N'Zérékoré 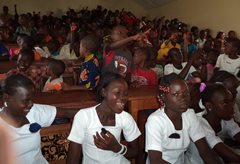 SOS Children’s Villages began its work in N'Zérékoré in 2001. In recent years, there has been a growing need for support within the community due to the increasingly difficult situation in the region and neighbouring countries.

The SOS Family Strengthening Programme, which we offer at our social centres, ensures that families in need have access to essential services, for example adequate education, sufficient food, regular health care, professional counselling, proper hygiene, and better housing, to name a few. All our efforts aim to stabilise families and alleviate hardship so that children can grow up in a secure home.

For children from the region who can no longer live with their parents, 13 SOS families can provide a loving home for up to 130 children. In each family, the children live with their brothers and sisters, affectionately cared for by their SOS mother.

The children attend the SOS Kindergarten together with children from the neighbourhood. This ensures that children from SOS families make friends and are integrated into the local community from a young age. The children then continue their education at the SOS Hermann Gmeiner primary and secondary schools, which are attended by over 700 pupils. Due to the scarcity of schools in the region, the presence of the SOS school is very important here.

When young people from the children’s village reach an age where they are ready to move out of the family home, the SOS Youth Programme makes shared accommodation available. Qualified SOS co-workers accompany and support the young people on their journey to becoming independent adults, for example by providing guidance and support in finding employment or training opportunities.