Although Guinea-Bissau has seen progress over recent years, thousands of children still face a life in crippling poverty. Child trafficking and the commercial sexual exploitation of minors still affect the lives of many. SOS Children's Villages and local authorities closely cooperate in order to support and protect the country's most vulnerable segment of population. 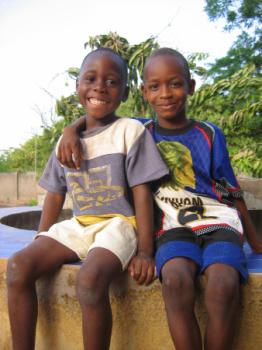 Gabú, capital of the homonymous region, has a population of roughly 38,000 and is located in easternmost Guinea-Bissau. The city is an important centre for commerce as well as for trade with neighbouring Senegal and Guinea. Gabú is one of the poorest regions in the country, and thus in West Africa. Poverty levels are extremely high in this sparsely populated agricultural region, and thousands of young people leave their villages behind each year to migrate south to the bigger cities in search of a better life.

The lack of educational institutions in the region is another huge problem that severely affects the population, in particular the younger generation who have little hope of improving their living conditions in the future if they do not receive the educational foundation to do so. But illiteracy remains shockingly prominent – up to 70 per cent of the local population cannot read or write at all, and almost 60 per cent of the adult population never attended school. These figures are gradually improving for the current generation of students, but progress is slow. Teachers receive very low wages and do not have sufficient teaching materials at their disposal; hence, motivation is often very low, which in turn leads to high levels of absenteeism amongst students.

Gabú Region also faces a number of serious health issues. Maternal mortality is high in the whole country, but here in the north it is even higher. In part, this is due to the fact that hospitals are far away and the journey there is expensive. Many women therefore do not receive antenatal care and births often aren’t attended by a medical professional. HIV has also been spreading and information is not sufficiently available to the population. Malaria, too, is still a major threat, there are frequent cholera outbreaks during the rainy seasons, and tuberculosis and other infectious diseases are common.


Children are the most vulnerable and urgently need protection

Child trafficking remains a problem that severely affects the region: UNICEF estimates that each and every month 200 children are trafficked from Guinea Bissau to other West African countries. Sometimes parents entrust their young boys to a Koranic teacher, or “marabout”, who deceives them into believing their sons will receive a religious education but then forces the boys to beg in the streets. Others are forced to work in cotton fields in Senegal, and girls often perform domestic work in conditions akin to slavery. If these children manage to escape, they often have no one to turn to and could end up in even more precarious a situation.


What we do in Gabú

Sisters doing each other’s hair (photo: C. Lesske)
SOS Children’s Villages began its work in Gabú in 2001. For children from the region who can no longer live with their parents, twelve SOS families can provide a loving home for up to 120 children. In each family, the children live with their brothers and sisters, affectionately cared for by their SOS mother.

The children attend the SOS Kindergarten together with children from the neighbourhood. This ensures that they make friends and are integrated into the local community from a young age. The kindergarten is very important to the local population as it allows single mothers and working parents to leave their children in safe hands while they are out making a living.

The children then continue their education at the SOS Hermann Gmeiner primary school, which is attended by up to 340 pupils. Due to the scarcity of schools in the region, the presence of the SOS school is very important here.