The lives of this ancient peoples have become increasingly insecure

At the kindergarten (photo: B. Bakkane)

Makalle (spelled Mek’ele in Tigray) is the capital of the Tigray Region in northern Ethiopia, near the border with Eritrea, and has a population of roughly 170,000. Most of the people in the region are of Tigray-Tigrinya ethnicity. The city is an important economic, industrial and educational centre in the country. The region was severely affected both by the Ethiopian Civil War (1974-1991) and more recently by the Eritrean-Ethiopian War (1998-2000), a border conflict in which hundreds of millions of dollars were spent and tens of thousands of people were killed. The situation between the two countries remains very tense and unstable.

The Tigray people have lived in this region for millennia and began to convert to Christianity in the fourth century. For a long time, they maintained their traditional lifestyle, engaging in small-scale farming and living in small communities or “parishes”. In recent decades, however, war, droughts, food shortages, rising food prices and unemployment have made the lives of the local population extremely precarious.


Securing the next meal is not always easy

In urban areas, many people now rely on informal employment such as casual labour, street vending or even begging. In 2008 more than 58 per cent of the total population were living in absolute poverty (earning less than a dollar a day) in Tigray.

Food price increments also mean that families spend a disproportionate amount of their income on food, leaving little for other necessities such as medicine, clothing or school materials for the children. Often, children drop out of school entirely and engage in casual labour to contribute to the household income. In the worst cases, frustrated fathers abandon their family, parents take ill due to their precarious living conditions, or children leave their homes to try and make their own way living on the streets. Other social problems arise when people are facing such severe living conditions, such as increasing levels of crime and prostitution, as well as girls and women forced into sex work.

The most vulnerable sectors of society are children without parental care, child and female headed households, people living with HIV/AIDS and the elderly without family support. SOS Children’s Villages supports vulnerable families in Makalle, as well as children who have lost parental care.

What we do in Makalle 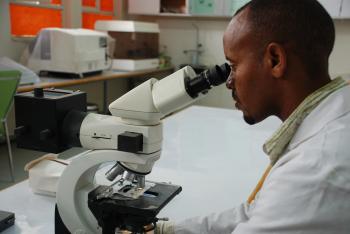 A student at the nursing school (photo: M. Peru)
SOS Children’s Villages began its efforts in Makalle in 1976. Today, our social centres here provide a family strengthening programme to members of the local community. The programme aims to help parents develop their capacities in a holistic and sustainable manner, to achieve self-reliance and economic autonomy, and to ensure access to essential services such as health care and education. We provide training workshops and guidance on income-generating activities as well as counselling and psychological support. The social centres also offer day-care, where up to 150 children are looked after while their parents are at work. We also run a farm where children and young people can learn skills in dairy, poultry, and vegetable production.

Our medical centre here is also open to the community and serves approximately 5,000 patients each year. Amongst others, it provides the following services: community participatory health, reproductive health, ante/post natal care, and voluntary HIV testing.

For children from the region who are no longer able to live with their parents, 19 SOS families can provide a loving home for up to 190 children. In each family, the children live with their brothers and sisters, affectionately cared for by their SOS mother. Together with children from the community, they attend the SOS Kindergarten here in Makalle. The children go on to complete their primary and secondary school education at the SOS Hermann Gmeiner School, which is currently attended by 960 students.

When young people from the children’s village reach an age where they feel ready to move out of the family home, the SOS Youth Programme makes shared accommodation available to them while they complete their education or vocational training. With the support of qualified counsellors, the young people learn to take responsibility, plan for their future and prepare for independent adult life.

SOS Vocational Training Centre Makalle is run as a nursing school and offers a three-year diploma course to around 45 students. The nursing school has an agreement with the Ministry of Health so that the graduates can find work in government hospitals and health centres.