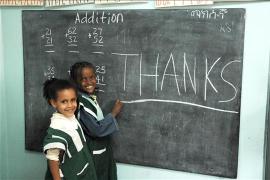 Harrar is a city of roughly 150,000 inhabitants, located in eastern Ethiopia, between the lush central highlands and the Somali desert. Harrar is considered one of four holy cities of Islam, along with Mecca, Medina and Jerusalem. Infrastructure in this part of the country is almost non-existent.

The horn of Africa is arguably the world's poorest spot. Tarmac roads, schools and hospitals are scarce. The region is marked by high infant mortality rates and above-average malnourishment figures, both among adults and young children. Food prices in the region have risen over 40 per cent as a result of the drought in June of 2011, driving hundreds of thousands further into hunger and starvation. Malnutrition remains the main reason why children die. Around 50,000 children have dropped out of school. 27 per cent of all children in Harrar do not go to school and lack access to health facilities. Nearly 30 per cent have no access to water, sanitation, food and shelter.

A main contributor to rural poverty in Harrar is the persistent lack of rainfall. Droughts occur on a regular basis and destroy crops and agricultural land, causing hunger and despair among the local population. Numerous diseases resulting from malnutrition affect the children of the region, for example facial infections. In and around Harrar, a high number of children lack decent food, potable water and medical supplies. Additionally, HIV/AIDS is particularly widespread. In such a harsh socioeconomic environment, the fundamental rights of children are violated every day.

Following a disastrous drought, SOS Children's Villages decided to take action by implementing its first SOS Children's Village in Ethiopia. Over the years, our organisation has intensified efforts in the region in order to protect and support thousands of orphaned and abandoned children all over the country. SOS Children's Village Harrar started its work in 1980. Since the eastern part of Ethiopia is particularly affected by difficult climate conditions, hundreds of thousands are frequently put on the brink of starvation within just a few weeks. Nowhere else in Ethiopia is the number of orphaned and abandoned children higher than here. Nearly 6,000 children in and around Harrar grow up without parental support - which represents nearly 10 per cent of the city's child population.

What we do in Harrar 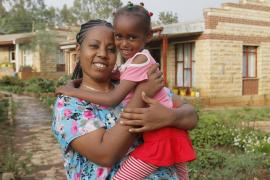 Happy to receive a mother's loving hug (photo: A. Meier)

SOS Children's Village Harrar is located in Eastern Ethiopia, one of the driest regions of the country. Our organisation is offering a package of services to the population in need. This includes family-based care for children who have lost parental care, a kindergarten, a school, vocational training and an SOS Youth Programme.

In 2012 SOS Children's Village Harrar launched its first family strengthening programme. This programme organised in collaboration with local agencies, is intended to support families at risk of abandoning their children and to encourage families to stay together. We offer health counselling, community support and psychological support. The activities are designed to ensure that children have access to essential services, such as education, health services and psycho-social support. Families are assisted with income generation and also receive help when dealing with the authorities.

The SOS Children's Village currently comprises 15 SOS families where up to 150 children can be cared for in a loving home by SOS mothers. The SOS Kindergarten has a total capacity of up to 200 children. Vulnerable children from Harrar and surrounding areas are being taken care of by our professional staff. The high illiteracy rate in the country makes the work of the SOS Hermann Gmeiner School particularly pertinent, up to 960 children receive primary and secondary schooling here.

At the SOS Youth Programme, up to 118 young people live in two youth houses. They are given the opportunity to live semi-independently while they attend vocational training or go on to higher education. With the support of qualified youth counsellors, the young people develop perspectives for their future, learn to shoulder responsibility and increasingly make their own decisions.