In Gode, numerous children are struggling to survive each and every day

SOS Children's Village Gode is located in the south-western part of Ethiopia, an area that is not connected to the country's capital Addis Ababa by road. In what seems to be one of the world's most forgotten corners, poverty levels are extremely high, even for Sub-Saharan standards. Millions lack access to the most basic services, including drinking water, decent housing and sanitation. Due to the region's particularly varying climate, floods and famine kill hundreds every year.

In addition to high levels of poverty, children and families are also affected by heavy fighting, as violence from warring factions in neighbouring Somalia continues to spill across the border. In 2011, one of the worst droughts that the country has seen killed tens of thousands of children in the Horn of Africa, leaving an additional 4.5 million people in need of support. Only one in ten children in Ethiopia's arid south-west receives a primary education. At secondary school, the situation is even worse. Without receiving an education, the child's future chances of breaking the cycle of poverty are fairly slim. A high number of children in and around Gode are also severely undernourished.


As a result of reoccurring droughts, SOS Children's Villages decided to take action

Ethiopia's south-west is more affected by poverty than any other region in the country. This can partly be explained by heavy droughts that continue to haunt the region's population. A disastrous dry spell was also the reason why SOS Children's Villages decided to implement yet another SOS Children's Village in Ethiopia in the year 2000. Our organisation started off by setting up an SOS Emergency Relief Programme to help the region's children and their families. Medical care and food was provided immediately and many young lives were saved. In 2011, pictures of children dying from starvation as a result of one of the worst droughts in Ethiopian history went around the world as SOS Children's Villages once more intensified its efforts to help the population in need.

What we do in Gode 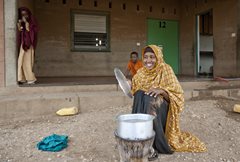 SOS mother outside, cooking (photo: B. Neelemann)
SOS Children's Villages started working in the area in 2004. The SOS Children's Village includes an SOS Social Centre that offers family strengthening, a kindergarten and an SOS Hermann Gmeiner School, where up to 480 students receive free primary and secondary education. Not only children from the SOS families benefit from the educational efforts of our organisation. We also extend our help to children and young people from marginalised, poor families in the region who could otherwise not afford to send their children to school. Children whose families cannot take care of them will find a loving home in one of the 12 SOS families, where they live with their brothers and sisters. In Gode, up to 120 children can be cared for by the SOS mothers.

At our SOS Social Centres, we offer family strengthening programmes that aim to strengthen existing family ties so that children can grow up in their own loving family. We have been supporting families and their communities by focusing on their economic autonomy and self-reliance, trying to prevent family break-ups that happen as a result of poverty or dysfunctional family structures. Furthermore, counselling and psychological support is being offered to the beneficiaries. The SOS Social Centre in Gode was set up in October 2010 and thousands of beneficiaries have sought help and support since then. Since 2002, SOS Children's Villages has also been running an SOS Medical Centre which can treat up to 10,000 people per year. SOS Medical Centres play an important role in decreasing child and maternal mortality by rendering standard preventive and curative medical services for thousands of mothers and children free of charge.

At the SOS Youth Programme, young people live in two youth houses. With the support of qualified youth counsellors, they develop perspectives for their future, learn to shoulder responsibility and increasingly make their own decisions.