Although Cape Verde has been politically stable for many years, a number of children on the islands continue to live in rather precarious conditions. Child labour remains a major problem. SOS Children's Villages has been supporting Cape Verdean children for more than three decades.

In a busy commercial hub, not all members of society benefit from a growing economy

SOS Children's Village Assomada is located centrally on São Tiago, the largest Cape Verdean island, about 64 km north of the capital, Praia. Assomada has a population of just over 12,000 and is situated on a high plateau in an agricultural region surrounded by mountains.

Assomada is home to one of the biggest and most important markets in the country and a lot of produce from the surrounding farmland is traded here, making it an important commercial centre. The city also has a primary and a secondary school, a technical vocational training school, and a university. In recent years, Assomada has attracted many people from all over Cape Verde who migrate here in search of work.

Most people here make a living in agriculture. However, due to scarcity of natural resources, frequent droughts and limited productivity, Cape Verde is still heavily reliant on imports, as well as international aid donations. As there are currently more Cape Verdeans living abroad than in the country itself, remittances sent to relatives at home also contribute substantially to the economy.

Although Cape Verde ratified the UN Convention on the Rights of the Child in 1992, the UN has expressed concern about a number of issues, including widespread practice of corporal punishment in the home and in schools, sexual abuse of minors, child abandonment and ill-treatment, the phenomenon of street children and child labour. Since women are traditionally the primary carers for children, their rights must be protected, too. Again, the UN has expressed concern about violence against women, such as domestic violence and sexual harassment, and has noted that in Cape Verde, women tend to be the main victims of poverty, especially in female-headed households, when women are unemployed or have low levels of education, and particularly in rural areas.

Sustainable and holistic support for the weakest members of society

When SOS Children’s Villages began its work in Cape Verde, there was a considerable lack of schools, so small schools were built in remote rural areas, as well as a primary school in Praia. The schools have since been handed over and are now run by local authorities, so SOS Children’s Villages can focus on its main remit of supporting families. Our family strengthening programme in Rincao (near Assomada) aims to alleviate hardship and provide support to families so that children can be protected and cared for. The centres provide health counselling and psychological support, training workshops, support for street children, as well as food, sanitation and medical care.

What we do in Assomada 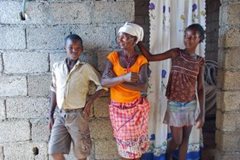 Mother and children from our family strengthening programme (photo: C. Ladavicius).
SOS Children's Villages began its work in Santa Catarina, a neighbourhood of Assomada, in 1984. For children from the region who are no longer able to live with their parents, ten SOS families can provide a loving home for up to 100 children. In each family, they live with their brothers and sisters and are affectionately cared for by their SOS mother.

When young people from the children’s village are ready to move out of the family home in order to pursue further education or training, the SOS Youth Programme provides shared accommodation. With the support of qualified counsellors, the young adults learn to take responsibility, plan their future and prepare for independent life.