Although Cameroon is one of the more stable countries in West Africa, vulnerable families and children face many challenges. Poverty, malnutrition and HIV/AIDS mark the lives of many, especially in rural areas. Children are in need of protection and care so that they can grow up in safety, go to school and become independent adults.

Vulnerable families and children are affected by conflict

When children have nobody to care for them, SOS Children`s Villages provides them with a home (photo: SOS archives)

The Republic of Cameroon is situated in West Africa and is home to 23.7 million people. In general terms, the country is more politically and economically stable than other countries in the region. However, families are in need of support as they continue to face important challenges.

Economic crises and conflicts in neighbouring countries have repeatedly affected the lives of Cameroonians. Cameroon’s neighbours – Nigeria, Central African Republic, Republic of Congo, Gabon and Equatorial Guinea – have all had their share of difficulties. This has led to an influx of refugees into Cameroon, especially in the northern and eastern areas of the country. The conflicts with Boko Haram in the far north of country have intensified in the recent past, and an increasing number of people have had to leave their homes.

Persistent rural poverty yet to be eradicated

Around 40 per cent of the population lives in poverty. However, poverty rates are much higher in rural areas – especially in the northern and eastern regions. Rural Cameroonians often face a lack of job opportunities, declining incomes, and insufficient educational and medical services. Basic infrastructure is also missing: in rural areas, only 53 per cent of the population has access to clean water. This contributed to the cholera epidemic in 2010-2011, which was one of the worst outbreaks in over 40 years.

Two further health issues are of concern in Cameroon. The first and greatest concern is HIV/AIDS: 4.5 per cent of the population is either HIV positive or has AIDS. The second problem is malnutrition: around 2.6 million people lack reliable access to sufficient, affordable and nutritious food. Refugees and internally displaced people in the northern and eastern provinces are particularly affected.

Children are in need of protection and care 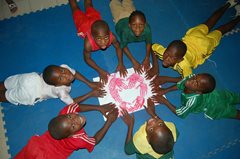 The country’s health issues also affect children. Infant- and maternal mortality rates are amongst the highest in the world. In the case of malnutrition the situation is getting worse: malnutrition in children rose by over 11 per cent between 2014 and 2016.

Only around 57 per cent of children finish primary education. School is free but parents often cannot afford the extra costs involved.

An estimated 310,000 children have lost their parents to AIDS but the lives of many more are affected. These children often have to care for sick relatives or become the main breadwinner. Although not legal, around 42 per cent of children are forced to work, (UNICEF est.).

Children have also been forced to fight. According to some reports it was children who carried out 21 suicide bombings carried out by Bolo Haram in the Far North Region of the country between July 2015 and February 2016.

SOS Children’s Villages has been supporting vulnerable children and families in Cameroon since 1998.

Strengthen families: We work with local community-based organisations to support families so that they can stay together. We ensure access to health services and education. We train adults so that they can get a job or start their own business. We also provide counselling to parents. Many of the families we work with have been affected by HIV/AIDS.

Care in SOS-families: For those children who cannot live with their families of origin, SOS Children’s Villages provides direct care in SOS families and foster families. Children grow up in a safe and supportive environment and are cared for by an SOS parent.

Wherever possible, children are encouraged to keep in touch with and visit their families of origin. We work closely with the children’s family of origin, so that children can return to live with their families. When this happens, we support the children and families during the period of change and adjustment.

Support for young people: We support young people until they are able to live independently. We provide them with training and liaise with local businesses so that they can gain work experience.

Health care: The medical centre in Douala has been providing health care to the local community since 2008.