A region which suffered badly during the war

Balancing on a seesaw (photo:K.Ilievska )

Gracanica, located in the district of Tuzla, is an old Bosnian town which used to be famous for its artisans. It was considered the regional cultural centre until the beginning of the 20th century because of its ten mosques and its numerous schools and libraries. The region is home to some significant industries: numerous coal mines and Bosnia's biggest electrical power plant are located here. The district's salt mines and salt works were an important source of employment until they were shut down in 2003.

About 55,000 people live in the municipality of Gracanica and 12, 711 in the town itself. Most of the population is Bosnian, with Serbs, Croats and Roma being the main minorities.

The region suffered badly during the Bosnian war, and once it ended, international organisations moved into the area to rebuild the social and physical infrastructure. The United Nations High Commissioner for Refugees worked with the region's displaced people, including many unaccompanied children.

Gracanica was the second location where SOS Children's Villages started working in Bosnia and Herzegovina. The three year Bosnian War between 1992 and 1995 had left many children without parental care. The area is still trying to recover from the legacy of war which brought such economic and social instability to the region.

What we do in Gracanica 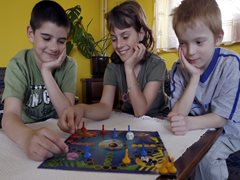 SOS Children's Villages has been supporting children and young people in the area since 1998. Children who have lost parental care can find a loving home in one of the 12 SOS families who can look after up to 78 children. The children attend local schools and grow up in a supportive and caring community.

Young adults who are ready to leave their SOS families move into our special houses in the city of Tuzla, which is located about 50 kilometres from Gracanica. Up to 34 young people can live there semi-independently while they attend higher education or receive training. With the support of qualified staff, the young people develop perspectives for their future, learn to shoulder responsibility and increasingly make their own decisions. They are encouraged to develop team spirit and build up contacts with friends, as well as with the relevant authorities and potential employers.