From afar, Arica can seem like a small paradise 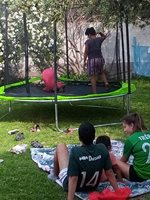 An SOS family in their garden (photo: SOS archives)

Arica has a population of almost 180,000 and is located in the far north of Chile, near the Peruvian border. It is often referred to as the “city of eternal spring” due to its pleasant climate that makes it something of an oasis in the midst of the surrounding desert. Its economy is based mainly on agricultural products such as vegetables, olives and fruit. The city is also a popular tourist destination in the region.

However, there is another side to Arica, which visitors are not likely to see. Over 7,000 households in Arica are estimated to live below the national poverty line. Many lack basic infrastructure such as running water. Crime rates in this region are the highest in all of Chile.

Because of the advantageous economic situation in Chile as compared to neighbouring Peru or Bolivia, many migrants cross the border in search of a better life. Time and again, this dream is shattered, however. Many do not find work and their makeshift camps are an eyesore to the local tourism industry. The reality these migrants find not only leads to precarious economic conditions, but also to severely detrimental psychological consequences for them and their families.

Proximity to the border is good for trade, but it also harbours myriad dangers

Due to Arica’s border location, drug trafficking is a big problem here, with many tonnes of drugs confiscated by the police each year. Drug addiction is widespread nonetheless, especially amongst young people, who consume marijuana, cocaine, as well as cocaine sulphate, called “pasta base” here. All of these factors lead to increased violence. Despite cooperative efforts between the Chilean and Peruvian governments and NGOs, child trafficking, too, continues to be a severe problem.

Children from struggling families in this region are particularly at risk of becoming entangled in criminal activities or ending up as substance abusers themselves. Children and young people, especially, need support so that they can become successful adults.

What we do in Arica

SOS Children’s Villages began its work in Arica in 1988.

The family homes are fully integrated into the neighbourhood. The children from the SOS families attend nearby schools together with local children, which helps them become part of the community.

We work closely with the families of origin, and in some cases support the families so that they can live together again.

Support for young people: When young people are ready to leave their SOS family in order to pursue further education or vocational training, the SOS Youth Programme provides shared accommodation. With the support of qualified counsellors, the young people can learn to take responsibility, plan their future and prepare for independent adult life.