Life as a subsistence farmer is increasingly fraught with difficulty 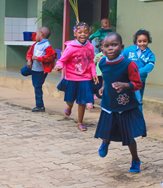 Chimoio is the capital of Manica Province, which stretches along the central region of Mozambique and borders Zimbabwe in the west. Chimoio has a population of roughly 80,000. Manica Province relies on agriculture, such as the cultivation of fruit and vegetables, to provide an income for its population. However, the region is also very prone to flooding, which affects thousands of people each year. Houses in erosion-prone areas are destroyed by the floods, food shortages arise, and drinking water, which most people source from traditional wells, is often contaminated.

Another issue that has affected the agricultural regions of Mozambique is the phenomenon of “land grab”. Foreign companies have increasingly been purchasing large areas of farmland in order to benefit from the anticipated rises in global food prices. Today, roughly 21 per cent of Mozambique’s entire agricultural area is in foreign hands. While these investments promise jobs and increased wealth for the region, often the livelihood of small subsistence farmers is threatened and no real poverty reduction is achieved.

Manica Province has one of the country's highest HIV/AIDS prevalence rates in the country, with up to 25 per cent of the population infected. This has resulted in a large number of children who have lost parental care. Often, these children are sent to foster families where they are at risk of being mistreated or exploited as domestic servants, and alternative models of care are not available.

Children whose lives have been affected by HIV/AIDS can also find it more difficult to stay in education, either because they have to care for sick parents or relatives, or because they face stigmatisation. But not only is education crucial for improving children’s chances of breaking the cycle of poverty as they become adults, it is also an important factor in combating HIV/AIDS, raising awareness and teaching young people how to protect themselves.

In recent years, a great number of Zimbabweans have come across the border to Manica Province in search of work, many of them illegally. It is also common for children to cross the border on their own; however, their illegal status exposes them to a number of risks including labour exploitation, limited access to education and welfare programmes, and sexual exploitation.

What we do in Chimoio 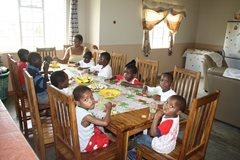 SOS Children’s Villages began its work in Chimoio in 2011 thanks to the donation of a suitable plot of land by the local government, and a substantial donation by the internationally renowned novelist Henning Mankell. The area around Chimoio is affected by extreme poverty, high rates of HIV/AIDS and many children who have lost parental care and are fending for themselves, often living on the streets, so the need for family-based care for children in need is great.

Family-based care: The village now provides a loving home for up to 110 children. In ten SOS families, they live with their brothers and sisters and are affectionately cared for by their SOS mother.

Family strengthening: The SOS Social Centre in Chimoio offers a family strengthening programme to people from the neighbourhood. In cooperation with local community organisations, the centre provides support in the areas of health, food security, nutrition and education. We also help families build homes. When needed, we make available clothes and blankets, school supplies and scholarships, as well as medication.