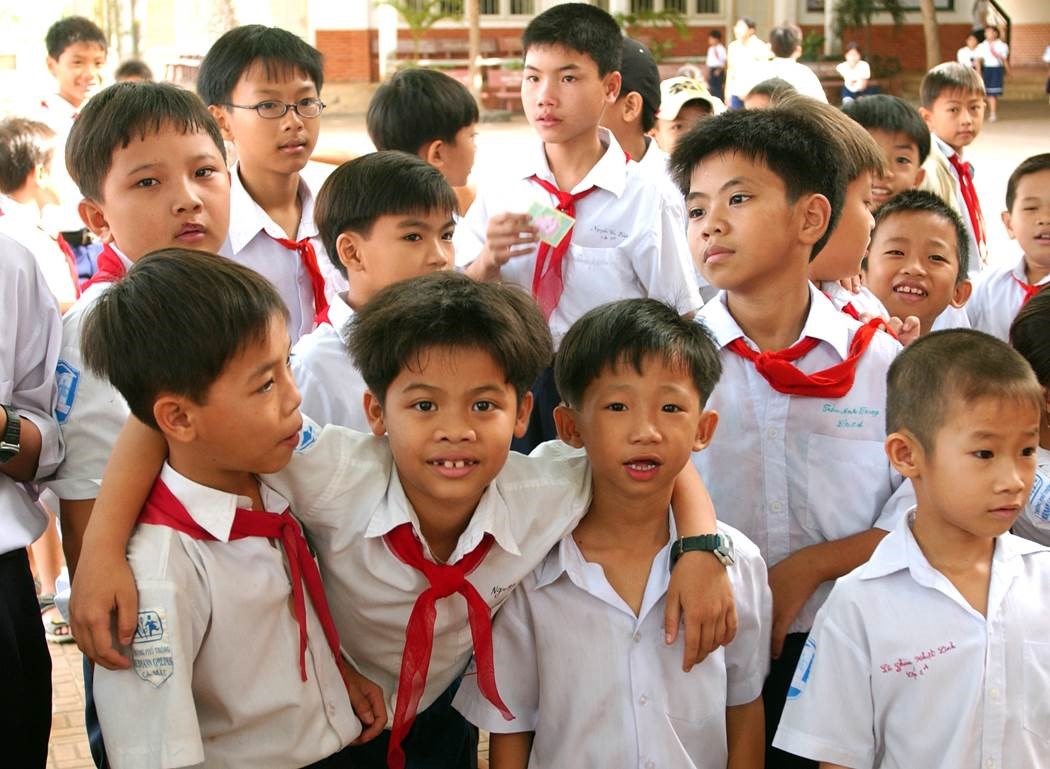 Meet Thang, a boy who has experienced some difficulties in life but who found his confidence among friends and teachers at the SOS Herman Gmeiner School in Viet Tri.

Thang….! Thang…..! Soon after his arrival at the school gate, even before parking his bicycle, Thang heard somebody calling his name. Turning around, he saw his friend Huy panting along behind him.

"What's the matter, Huy..?", Thang stopped to wait for his close friend.
"Have you done the math exercise which our teacher gave us yesterday? I feel very discouraged because it is too difficult …", Huy asked. "Ah, is it math exercise no 3? I have already done it by myself, I'll show you how to do it in the class", Thang answered.

The two friends chatted as they went to their class.

Yes, Thang is very important to his classmates. He is considered a "mathematician" in the class. Whenever there is a difficult math exercise and all the other classmates have to give upt, only Thang is able to complete it. He is not only good at math, but also in other subjects. Even literature, the subject students are often the most afraid of learning.

"Father is a yellow candle. Mother is a green candle. I am a pink candle. Three candles twinkle together and brighten up a cosy family…"

These are some of the words of Thang's favourite song because its melody and words speak out his thirst for a cosy, happy family. Thang had a happy family, before. He received the warmth of glistering happiness from both his father and mother. But the happiness didn't last long. When Thang was three years old, he was separated from his mom. Longing for a more comfortable material life, Thang's mom went to work in Hungary. The small house without mom's care became cold and lonely…

Time went by and Thang grew up in his dad's love and care. His mom's image and the thirst for meeting his mom engraved upon Thang's mind. The letters from his mom were a source of consolationand encouragment both for him and his father. However, the letters from his mom became less and less frequent and finally disappeared… The letters from Thang and his father were sent to his mother but there was no reply. The attempts at making phone calls were failures. Thang was stupefied and his father was quiet, worried and miserable. Eight years passed by. The more he grew, the bigger were his wishes of being taken care of by his mother. Sometimes, Thang spoke silently in his tears: "Mom! Where are you now? Why don't you return to live with dad and me…?"

Suddenly, Thang heard that his mother had gotten married to another man and he was going to have half brothers and sisters…". Immediately, Thang run quickly to his father and cried: "Dad! Has mother run away from us? She got married …?". His father didn't answer his questions. His father gently ran his big and lumpy hands into Thang's hair and looked very far away…

The more Thang loved his father, the more he strived to do well at school. His immature thoughts turned to a frail hope that he had to try his best to learn well so that his mom would come back. Thang studied as much as he could. And all his efforts were handsomely rewarded.

Finally, his mother returned home after a long time living far away. His mother came back with three half brothers and sisters. His father seemed to be devastated and Thang suffered a shock. And the world seemed to collapse in front of him. Thang's studies went down, he cried many nights and asked himself why his mother did that to him and his father?

After the divorce, his mother went back to Hungary. "Please, forgive me, my son…!", his mother said. Thang didn't understand the problem and didn't know the reason why his mother tore herself away from him and his father. Thang was getting angry with his mother because he still loved her a lot. Then, his father got remarried and had children on his own with his new wife. His father's feelings for Thang didn't change but his interest in him did change over time, partly because of busy work, partly because of being absorbed in the happiness of the new family. Thang was sad, and he was completely obsessed with feelings of abandonment and loneliness for a long time, which seemed to be too difficult for him to overcome.

However, Thang had teachers and friends alongside him. They always encouraged him a lot. At the SOS Hermann Gmeiner School in Viet Tri, Thang saw many friends from the SOS Children's Village who had more difficult circumstances than himself. Many friends had lost both their parents, some and had suffered losing their parental care without relatives… All these friends were taken home to live in a cosy nest of the SOS Children's Village. They had a deep aspiration of living in a cosy family, overcaming difficulties to study and to lead a meaningful life…

Now, Thang has found his confidence in life. Teachers and friends are his spiritual base. He tries his best to study well so as to become a good citizen in society. Thang stands on his own feet and alongside himself is the company of his teachers and friends at the SOS Hermann Gmeiner School Viet Tri. Life is always open to Thang's eyes, and as a writer once wrote, "believe that life is wonderful and beautiful".