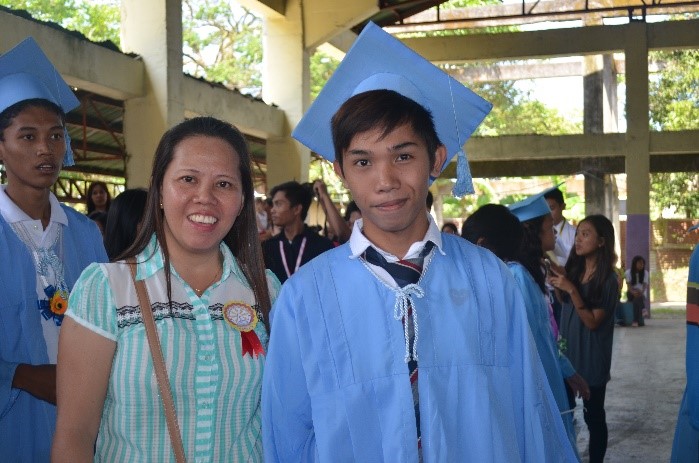 SOS Children's Villages has been present in Calbayog for over four decades, and has become well-known and respected among the local population. The village currently has 82 children and 41 young adults under its care.

The city of Calbayog, on the western coast of the island of Samar, is the third location where SOS Children's Villages became active in the Philippines. Calbayog is one of the bigger cities of Western Samar and is a commercial centre in the region. Traditionally the people have lived off agriculture and fishing, but there is also some industry. Samar is one of the poorest regions in the Philippines. Life, especially for those living in rural areas, is full of hardships. Many people do not have adequate housing, and they live in either makeshift shelters or in informal settlements.

At the age of eight, Renato has been working hard in order to provide food. It was not an easy task to replace his parent’s responsibility, who sadly, had neglected him and his siblings.

“When Renato came under my care he kept on asking me if he’ll return home. I would always reply to him, SOS is your new home,” Mama Wilma, his SOS mother, says.

Living in the village has given Renato a lot of good memories. This includes the first birthday celebration for him. “Mama Wilma let me play the entire afternoon. When I came home, my home was in darkness. I remember getting worried first. The lights were out. As I opened the front door, I called out to my mother. I reached to the light switch on the wall next the door,” Renato said with a smile. “Surprise! The lights came on without me having to turn on the switch. There in the corner of the room were my family and they were singing Happy Birthday. I couldn’t help but cry,” said Renato. “Mama Wilma quickly hugged me and wipe my tears,” he added. The smile comes back to Renato’s face. “It was a tear of joy, to hear my family singing happy birthday and celebrating my birthday for the first time”.

Renato has many friends. “In the Youth Boy’s home, we are all on the same page and help each other in terms of school work and house chores. It’s a good thing that most of my friends here are also my schoolmates,” he says. “During my high school graduation, I was really pressured since school life is not easy. There were many challenges that I faced. I was proud that I overcame them. Mama Wilma accompanied me to the stage to get my diploma; it was one of the happiest moments in my life.” Renato adds.

“I never thought that I could be a child – play – go to school or stop worrying about taking care of my little brother and sister. I am happy that I had a good time with Mama Wilma and my family,” said Renato, with a sigh of relief.