SOS Children’s Villages started working in North Macedonia in 1995 and has continued to expand its work in the country, responding to the needs of children and families at risk in the capital city of Skopje. In 2015 we started an emergency programme in response to the refugee crisis.

An independent nation since 1991 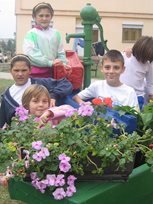 North Macedonia is a landlocked country bordering Serbia in the north, Kosovo in the northwest, Bulgaria in the east, Greece in the south, and Albania in the west. The capital city is Skopje with about 600,000 inhabitants.

The population is just over two million (July 2019 est.), 64 per cent are Macedonians, around a quarter of the population is ethnic Albanian. Other minorities include: Turks (3.9 per cent), Roma (2.7 per cent) and Serbs (1.8 per cent). The official language is Macedonian. Most Albanians and Turks are Muslim, most of the Slavs are members of the Eastern Orthodox or Macedonian Orthodox Churches.

A fall in living standards

Although North Macedonia’s economy has been slowly improving since 1991, it still has one of the lowest per capita gross domestic products in Europe. The standard of living has actually fallen since independence. Furthermore, there is a growing gap in incomes. Unemployment rates are persistently high and officially currently estimated to be around 30 per cent. The actual number of people without a steady income is thought to be higher. As a result, 22 per cent of the population lives below the nationally-established poverty line. Families with two adults and three or more children are most at risk of being poor. This combination of poverty and high unemployment has forced many people to move abroad in search of work.

Most Macedonians who are employed, work in the service section. About 26 per cent work in industry (textiles account for half the exports) and 17 per cent in agriculture.

North Macedonia has been a candidate to join the European Union since 2005. A key aspect to its admission is corruption and international organisations are working in the country to fight it and promote inter-ethnic dialogue and cooperation. They are also addressing gender inequality and supporting victims of domestic violence.

Children have been badly affected by the recent changes

The children of North Macedonia have been affected by the falling standards of living. As parents have struggled to find employment, there has been an increase in poverty and households with children are particularly affected.

The number of cases of under-five infant mortality remains high: at 7.4 per 1,000 live births the rate remains above the European Union average of 4.7 per 1,000 births. The figure is higher in rural areas than in urban areas. In fact children from rural areas face other problems too: they are more likely to drop out of primary education and less likely to go onto secondary education.

Children with a Roma background are particularly disadvantaged – more of them live in poverty and drop out of primary school. Only about one third of Roma children attend secondary school. 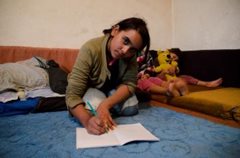 Thanks to the SOS Family Strengthening Programme, this young girl is able to go to school (photo: K. Ilievska).

Strengthen families: We work with the local authorities and communities to support families, so that they can stay together. The assistance we provide varies depending on the needs of the families, but can include material assistance and counselling for parents. We also provide training which will help families make a living in the future.

Care in families: If, in spite of our support, children cannot be cared for by their parents, the children can find a new home in an SOS family or a foster family. The foster families have been selected and trained by SOS Children's Villages to ensure that the children are cared for to the highest standards set by SOS Children's Villages. In order to do this, we provide continuous social and emotional support.  Children grow up with their brothers and sisters in a safe environment.

Wherever possible, we work closely with the children’s family of origin, so that the children can return to live with them. Whenever this happens, we work towards supporting them during this period of change and adjustment.

Support for young people: Young people find it hard to become independent in North Macedonia. We offer both practical and psychological support to young people while they finish their studies and improve their skills. We collaborate with local businesses so that young people have access to internships, scholarships and vocational training.