As yet, support efforts fail to reach large proportions of the rural population 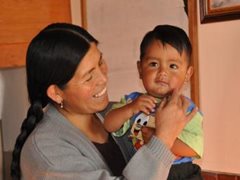 Sucre, Bolivia’s constitutional capital, lies at an altitude of 2,750 metres above sea level in the department of Chuquisaca and has almost 250,000 inhabitants. The city attracts a steady stream of tourists thanks to its Andalusian-style historical centre and well-preserved colonial architecture.

Today, around 90 per cent of Sucre’s population live in urban areas. Life is very tough in the surrounding countryside, as farming methods are out-dated and the topography makes agriculture difficult. The rural population is also still very much excluded from formal education. Although literacy rates have improved to over 90 per cent in urban Sucre, in rural areas just 47 per cent have completed any formal education and up to 70 per cent of men are illiterate.

In search of a better life, people flock to the city, but what they find there often does not mean a betterment of their situation. Without qualifications, finding work can be near impossible and a life of illegal labour is then the only option. Child labour also continues to be a problem, as often children are made to work in order to contribute to the family’s income.

Although the rate of extreme poverty in Bolivia has been reduced in recent years to a current 32.7 per cent, in the department of Chuquisaca it remains far above the national average, at a staggering 61.5 per cent. This amounts to approximately 345,000 people in the area living in extreme poverty, which means that their basic needs, such as clean water, adequate housing and nutrition, are not fulfilled.

Poverty affects children more severely than anyone else. Almost a third of children are chronically malnourished. Parents urgently require support so that their children’s health and education can be ensured and the cycle of poverty broken.

What we do in Sucre 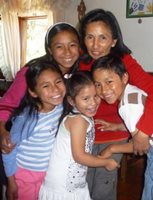 SOS Children’s Villages began its work in Sucre in 1996 with the aim of alleviating hardship in the community. The social centres here offer a family strengthening programme that supports children, women and families by making a contribution towards improving their living conditions. Information events are held on balanced diets and other health-related issues. There is also a health centre that is open to the community.

The social centres also provide a range of further vocational training courses for women from the community. If women – and single mothers in particular – can gain qualifications, they can improve their income and societal status.

Day-care and a childminding programme are in place allowing parents to leave their children in safe hands while they go out to work.

For children in Sucre who are no longer able to live with their parents, 14 SOS families can provide a loving home for over 100 children. They live with their brothers and sisters and are affectionately cared for by their SOS mothers.

Shared accommodation is available for young people for the duration of their secondary education. Here, they learn to take responsibility and prepare for independent life, all the while looked after by qualified youth counsellors.